When the giro de Italia started in San Remo the 21st of  May, 1987, it was clear that team Carrera had a problem with Visentini and Roche.

The first one was the former winner of the " corsa"  had no results in the season, and Roche had won Romandía and Valencia with good results in all the races he had taken part.
Besides that, Visentini was saying that Roche was focusing in the Tour and that he would help Roche in the French race ... Roche knew that Visentini had booked vacations in a cruise for July.

Vincezo Torriani had designed a tougher giro in comparison with the previous years. There were important climbs, such as Pila, Marmolada, Pordoi, Terminillo, San Marco or Bondone. So this time the winner should be a more complete rider.

This was the route ( source Wikipedia with some corrections)


And what about the participation ?. There were three very strong teams, and it was supposed that the winner would be one of their cyclists.

Team Carrera with Roche and Visentini.
Team Panasonic with Millar, Winnen, Anderson or even the young Breukink.
Team del Tongo with Saronni, Baronchelli and Giupponi.

But the controversy and the attention were in the Carrera team. Boifava tried to convince Roche to help Visentini but the Irish just wanted the strongest legs to decide the leader of the race.


And the winner and first maglia rosa was Visentini

Roche just could be ninth, due to problems with his bike, 5 second ahead of Visentini.
The following day was an interesting one with two stages. The first one a 31 kilometer stage from San Remo to San Romolo, and the second a descent trial from Poggio to San Remo.


And that day changed the race. Frstly because Erik Breukink won the first stage taking the rosa, in an exhibition of team Panasonic with four riders in the top5 ( Roche was fourth) 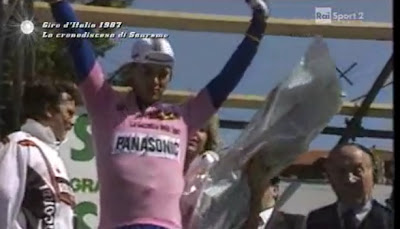 and more important, Roche won the trial with Visentini 5th 7" ahead and ten more due to bonus. So even Breukink was still in rosa, Roche was now the best placed favourite, and more importangtly, he was the first placed Carrera rider.


Besides this, Roche was dissapointed with the team because they were very happy with the win of Visentini in the prologue and sad because of Visentini time in the trial instead of delighted by Roche´s win.

These two days were dissapointing for Jean Francoise Bernard that lost nearly two minutes. It was more frustrating than time, Bernard had had two trials ( his speciallity ) and had performed badly.

The following important test was the team time trial, that Carrera won. Roche was now the leader, the maglia rosa for the first time in his life

Roche was first with 15" to Visentini, 52" to Cassani, 53" to Breukink and more than a minute to the rest. Anderson and Argentin close to 1'30", Millar close to 2 minutes, Saronni and Giupponi close to 2'30" and Bernard and Lejarreta close to four minutes ahead. Baronchelli was out of contention after missing their partners in the team time trial due to illness.

Now Visentini and Roche should wait to the San Marino time trial. But there were interesting stages till then and the rivals were not defeated at all ...

In the way to Montalcino , Argentin showed his power in uphill finishes, winning his second stage, with Giupponi second and the leader Roche in third position.

There were short differences in the bunch, but important ones. Visentini was only 11th in the stage, 7 seconds ahead of Roche, that added to the bonus of 10" for the Irish made a distance of 32" in the overall.

But there was another problem, Moreno Argentin. He was gaigning time in bonus, and he should be watched.
Bernard lost time again. He was not a contender at all.

And after a transition day, the first mountain finish came, on the Terminillo climb,a regular and long climb that watched Bagot won after a pact with Scheppers, Roche´s domestique. Fagor would help Roche in the mountains to keep the pink jersey.

It was a great day for Roche and Carrera. Anderson lost nearly one minute, Saronni 2' and Argentin, one of the finest riders in the race 3'30".

On the other hand Breukink and Rominger were proving themselves as real cotenders for the giro. They were 3rd and eigth overall respectivelly.

Meanwhile Roche was happy with his pink jersey. The relationship between him and Visentini seemed to be good at that moment.


Things were working well for Carrera but ...

In the following stage Argentin would win his third stage, he was the strongest in medium mountain stages and he showed his power in Roccasaro.

Two sprint days for Rossola and Freuler and we got to the rest day the 31st of May in Bari. Important things were going to be sorted in the second part of the race. Mountains and time trials. The Dolomites, and the fearsome Marmolada were awaiting.