Merckx, the last dream. Part I. 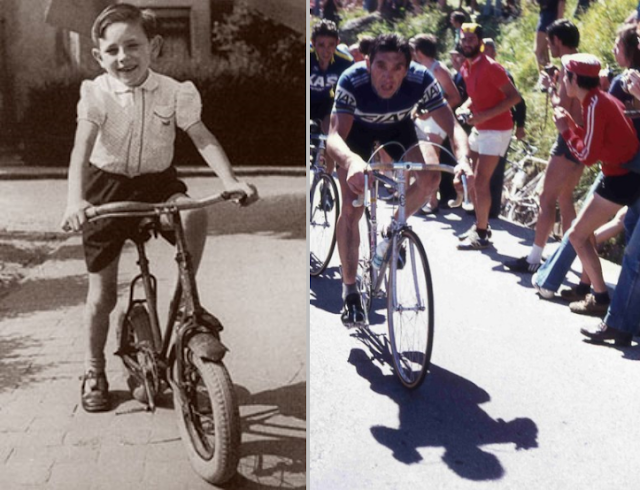 The 1977 season was one of change for Merckx. Molteni had left cycling and Merckx went to FIAT with Geminiani. 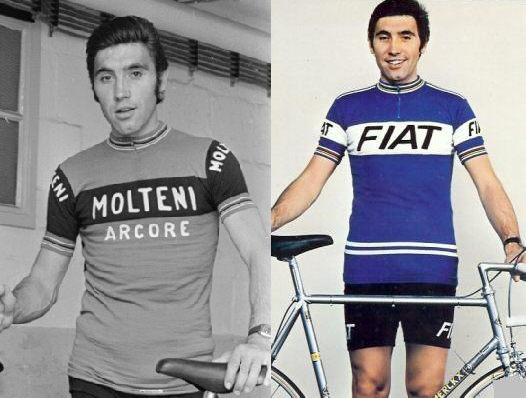 He was focusing just in the Tour and spring classics, but he had no victories in them ( just the second time in his life, with the 1974 season,..., the one of the triple crown). His best result was sixth in a great Liege Bastogne Liege,that was won by a young Hinault 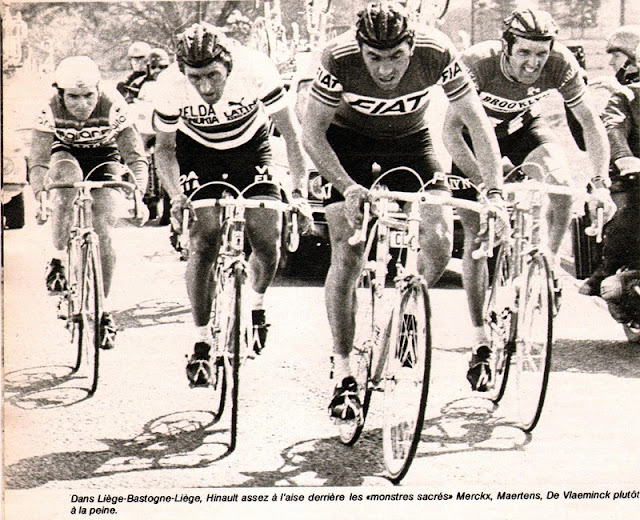 
... due to this lack of victories , people were wondering if he was able to success in the Tour.
In the dauphine Liberé the young French, Bernard Hinault, appeared again, winning the race in front of Thevenet and Van Impe ... Merckx was just 8th 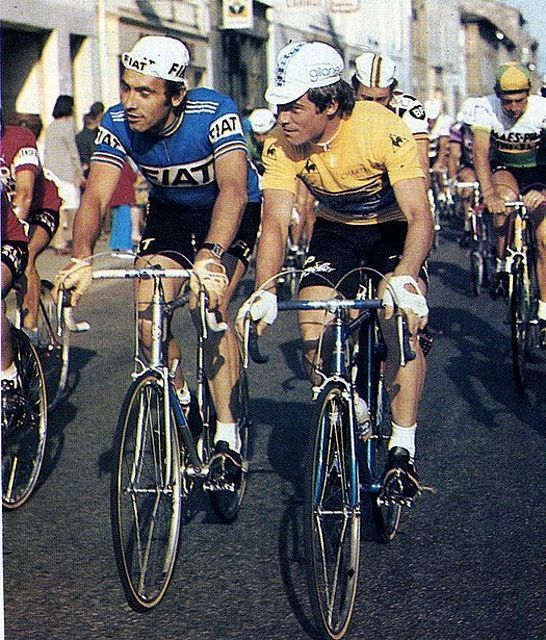 There were a lot of important riders such as Van Impe, Zoetemelk, Ocaña, Kuiper, and the biggest favourite, the French Bernard Thevenet winner in 1975, thanks to his great rides in the Alps ( Pra Loup and Serre Chevalier).
It was not a very hard Tour, with some splits stages and the Pyrenees coming too soon:

It was not a tour for pure climbers, but if the attacked strong in the Alps the had some options. However, complete riders like Thevenet or Zoetemelk were favourites.
The most important mountain stages were:
Auch - Pau with Aspin, Tourmalet and Aubisque
...and the Alps...
15th stage ( part 1)

As you can see a not very difficult Tour, with 5 individual time trials ( with a prologue and a very short one), and a short team time trial ... perfect for Merckx, but was Merckx perfect for the race?


In the prologue, people were wondering if Merckx would be the first yellow ... he performed well ( the best of all the favourites ) but just third behind Knetemann and a young ang giant German rider, Dietrich Thurau . Ocaña was the worst of the favourites, showing that it wasn´t going to be his Tour either
FLEURANCE, 5 km ITT

35. Ocaña à 26"
The young German was excited and was thinking that if he survived the coming Pyrenean stages he could be in yellow for the 13th stage in his own country ... 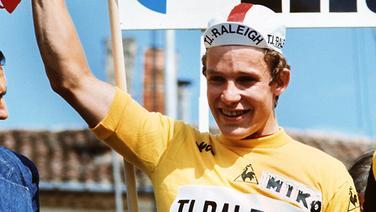 The first stage finished in a sprint and suddenly we were facing the Pyrenees , with Aspin, Tourmalet and Aubisque.
Surprisingly, Thurau resisted the climbs anf won the sprint of the favourtite´s group ( all but Ocaña) ... who knew, perhaps this youngster could be a surprise in the overall

The overall had some changes, not for Thurau ... Merckx was now in second position, waiting for his moment ( it could be the 5th stage, an individual time trial)

And after three transition stages, the time trial came, Merckx was the favourite to wear the yellow, would he be able to win or at least to steal the yellow from Thurau´s shoulders?.
In 1974 and 1975 Tours ( and in 1976 giro) Merckx had shown less power in climbs, but this was a "soft" Tour and if he was able to take the yellow he could keep it easily till the Alps and then who knew, after all, he was Merckx ...


Could Merckx wear the yellow in a seventh Tour?.

When Merckx started the time trial , evrybody noticed that he was riding well ( even though not superbly) 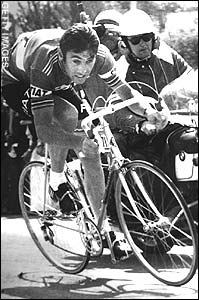 ... but there was a problem, a rocket was coming behid him beating his times and avoiding a new victory and yellow for the Belgian 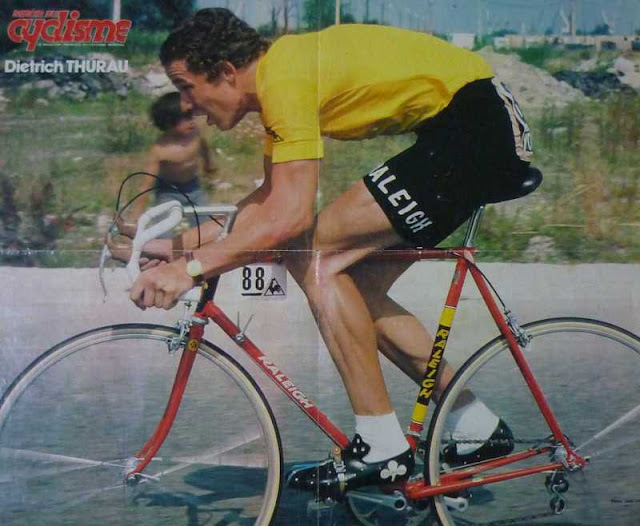 Thurau was performing very well and the best times of the day fall behind for more than a minute.
When Merckx arrived he had overcome knetemann´s time by 15", and Thevenet´s by 16" , he was the provissional winner and yellow, but he knew he wasn´t.
Merckx time was 40'14" ...

...the German rocket of Ti-Raleigh destroyed the field with a superb 39'24", keeping the yellow and winning his second stage 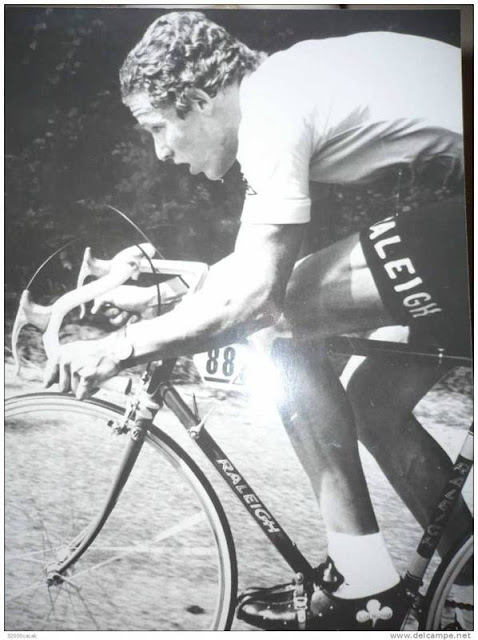 And then, there were two transition stages before the very short 4km team time trial at Angers. Times were not counted for overall, but there were small bonus.
FIAT won the stage and Ti Raleigh third, with Thurau showing his strength 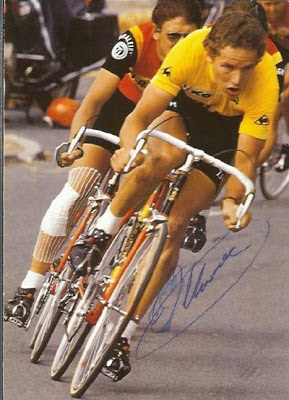 It was being a boring Tour without very important stages, and with short time trials, ideal for a crepuscular Merckx to keep his faith in a record 6th Tour win.

We were getting closer to Germany and the dream of thurau was coming true. Merckx was always close to he leader ( or was it the opposite?) 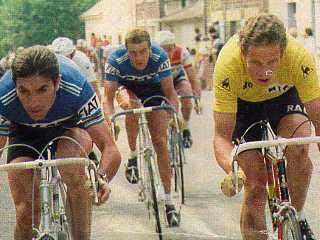 The most remarkable of these stages was the great solo break of Merckx partner, Patrick Sercu in the way to Charleroi.

Finally we got to Germany 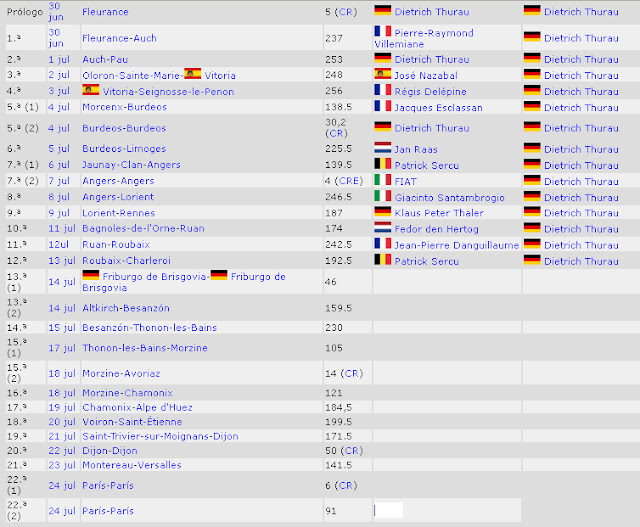 And Dietrich Thurau was still the leader of the race... and German crowd was excited ...

The Alps were still to come but Thurau´s achievement was incredible.

The 17th of July, were the first proper Alpine stages, to Morzine ( one of them a time trial to avoriaz), the young leader was still happy 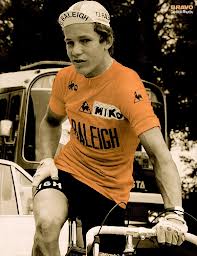 ... and it was the moment for the contenders, Merckx shape was unknown, they hadn´t passed very difficult stages and everybody was waiting to see the cannibal ... it was climbers moment ( Aja, Galdós and especially Vain Impe)...

Was Merckx going to survive the Alps?, will Thevenet be the executioner of Merckx again? ... after a boring Tour, excitement and drama were coming...

All the favourites saved energy for the afternoon time trial to Morzine Avoriaz, it was the race of the truth, the wacht won´t lie...

Would Thurau be able to retain the yellow?, and Merckx?, was the Belgian strong enough to face the climbers in this time trial?

... people were speaking about Merckx, Van Impe, Thevenet, but the man who broke the clock was Zoetemelk who performed superbly 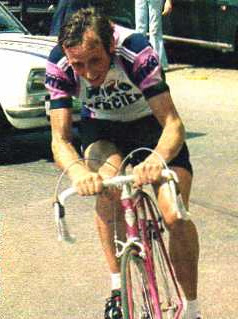 
Climbers had to move because there weren´t so many clear options ( perhaps only this stage and the one of the Alpe ) and the stage was quick since the beginning with Menendez ( Kas) leading the pace.
And the turning point came in Forclaz, with Menendez ahead, and with a little more of a kilometre from the summit, two riders struggled, one young and the other old ... yes we are speaking about Thurau and Merckx

Van Impe and Thevenet took advantage and had 1 minute to the at the summit. Menedez was caught and surprisingly Merckx couldn´t join the favourites on the descend of Forclaz or Montets losing more than two minutes to the favourites group, with the stage won by Thurau, the German had used all his strength to cath the group and outsprinted them to have his fourth stage win.

But in the end of their hearts people were expecting the last attack, the last attempt of Merckx to win a Tour
... in the stage of Alpe D´Huez all people will dream, it was going to be the last dream of the Belgian...