Fuente, a fool on the hills.Part I.

Jose Manuel Fuente, also known as " Tarangu" was born in Limanes, Asturias, the 30th of September, 1945. 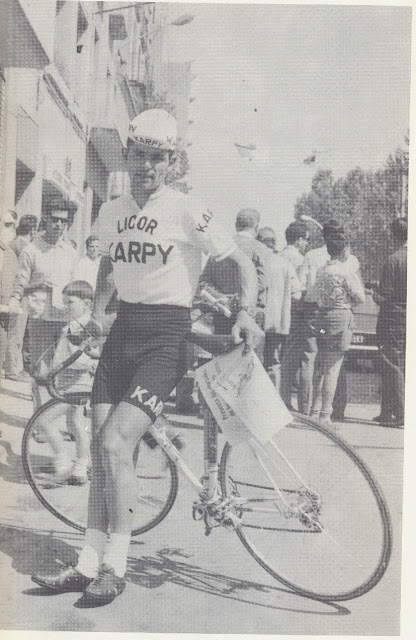 and finished his career at Bianchi 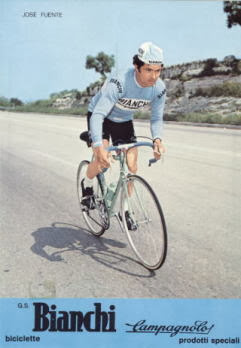 But he had his best years in the powerful Kas team, where he was known as one of the best climbers ever.

1971 was the year when Fuente started to show his climber conditions. He won the climber´s jersey in the Giro and won two mountain stages at the Tour ( one of them the dramatic to Luchon where Ocaña lost the Tour in Mente), even though he shouldn´t have won them because he was reinstated twice after missing the allowed time in early stages.

But the turning point was 1972. Fuente took part in the Vuelta, just to help some of his partners. In the stage that finished in Formigal, Fuente, who had been encouraged by the leader Perurena, attacked, first with José Grande ( from Werner team) and later alone, to win the stage with eight minutes to the favourites.

He was now a star, but that was not important for Fuente, he was taking part in the 1972 Giro, and he was just thinking in beating Merckx.

That was one of the typical things hat made him special and unforgettable.

The Giro started well for Fuente who won the 4th stage ( a half stage) with summit finish in Blockhaus, with Merckx 2'36" ahead. 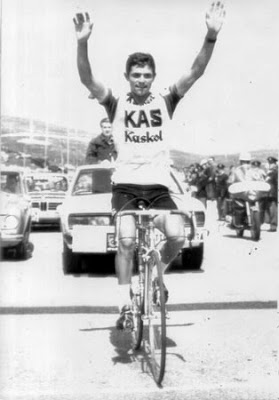 Fuente, the winner of the Vuelta, was now the pink jersey.

And he made a mistake, he thought he was unstoppable, even for Merckx.

Merckx would made Fuente pay his confidence in the 7th stage to Catanzaro. In a hilly stage, Merckx and his team Molteni planned a very hard stage ( although it was a short stage), and in Monte Scuro, only Lazcano and Fuente from Kas , and Gosta Petterson resisted the cannibal. 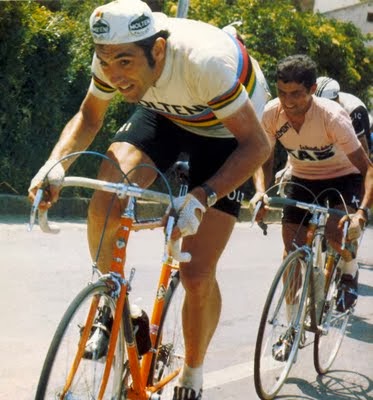 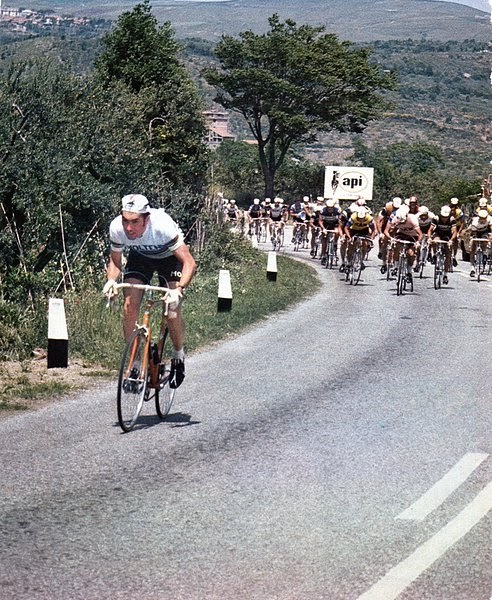 But when the descent came, only the Sweden was with Merckx, and Fuente and Lazcano decided ( after trying a chase) to be caught by the bunch.

Meanwhile Merckx, knowing that it was a very important day for the race, was riding as hard as possible.

When Petterson and Merckx arrived at Catanzaro, the Giro had a new leader, the rainbow jersey, the king of cycling, Eddy Merckx.

Petterson would win the stage, with Merckx second in the stage , and Fuente ( in the bunch) losing 4'13".

A new emperor in the 1972 Giro. Some days later, Merckx won the time trial to Forte dei Marmi, and left Fuente ( who was still third overall) 3´59" behind, with Petterson second at 1'32" of Merckx.

And Sunday the second of June , 1972, was going to be a very special day. It was a key stage, and Fuente had not surrendered to Merckx.

The Spanish climber will make a new attempt to take the maglia. This was the chosen day for Kas to destroy the field, and Merckx knew that if he saved the day, his third win in Italy would be nearly assured.


In a nice stage till the bottom of Sestriere, Fuente decided that the opportunity was there and attacked furiously dropping Merckx before the summit.

There was a breakaway with Schoenmacker, Lopez Carril and Galdos, and Fuente caught them. Merckx seemed to suffer, the advantage was increasing, and in the bottom of Jafferau was 1'15". The spaniard was a real danger.

And the final climb didn´t dissapoint. In a day when people were in front of TVs following the great duel between the Belgian and the Spanish climber.

With Galdos dropped and L.Carril riding his last meters with Fuente, Merckx accelerated behind . It was a man to man fight. And it was Fuente´s favourite terrain.

Merckx was suffering a lot, and the miracle of Fuente was possible.


Was the pink jersey in risk?.

Fuente was flying alone to the finish line, but he started to suffer with three kilometers left, and finally, in a dramatic moment, he was passed by Merckx, with just one kilometer to go. Fuente was finally cracking, and Merckx, who had seemed to be dead just some minutes before, was know taking control of the stage, and the Giro, because Gosta Petterson was losing more than a minute. 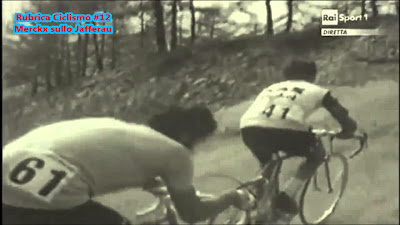 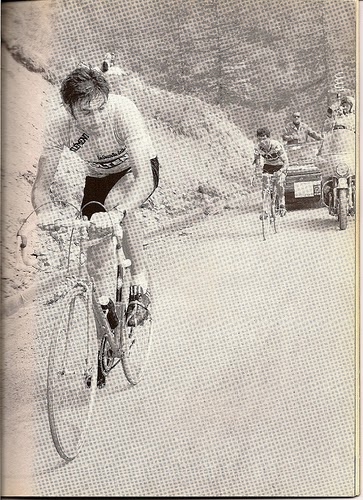 And later by Panizza. He had lost a good day, due to a hasty attack, in some way a typical Fuente attack.

Merckx won the stage with 26" to Panizza and 47" to Fuente, who was still third overall. 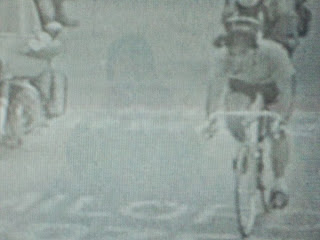 There were some important stages still before finishIng the giro, and Fuente , who was feeling very strong, wanted to show Merckx how powerful he was.

Merckx won the mountain stage of Livigno in spite of Fuente attacks, 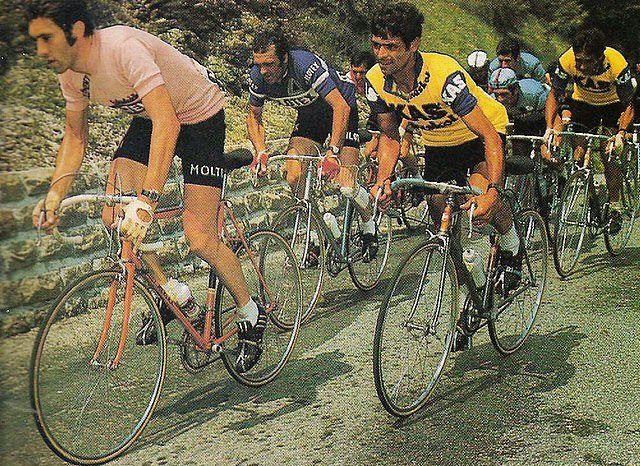 ... the Spaniard had a puncture that cost him a minute, and Merckx forced the pace in the final short descent

In spite of the bad luck, Fuente was second overall, and the stage with a summit finish at Stelvio was the following one. A short 88 kilometer stage, perfect for Fuente.

This was the overall:
In case of doubts, Fuente promised to attack ( as he had done during the Giro).

Only 74 riders were still alive, and left Livigno to face what was going to be an epic stage in Giro´s history.

It was a normal and nice stage till the bottom of the Stelvio when attacks started, first Lazcano, and finally Fuente with 12 kilometers left. Nobody could respond.

Fuente was looking for a second stage, and trying to show the world of cycling that Merckx was human, as Ocaña had shown the year before in the Tour.

Merckx tried to chase, and Gimondi and Petterson were out of contention.

The gap was opening and Galdos left Merckx´s group with five kilometers to go. It was a Spanish showdown, with Carril and Lazcano on Merckx wheel 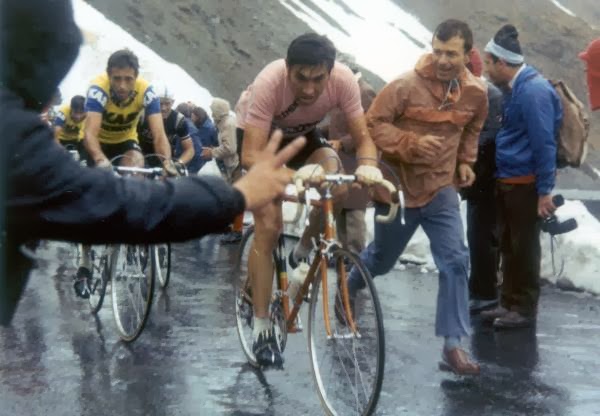 Fuente was a heroe for Italian tifosi, and Merckx new that with Ocaña and the brave Fuente, the great Tours would be more difficult in the future.

Merckx was trying his best but couldn´t close the gap 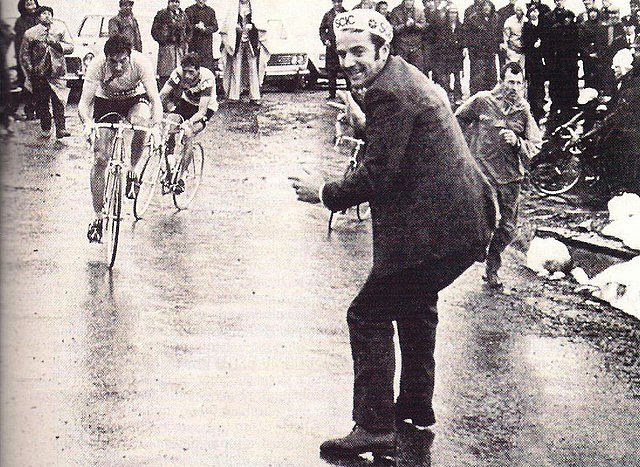 Fuente won the stage, and he wrote his name in the history of Cima Coppi

38" later Galdos appeared, achieving a place in the podium ... more than two minutes behind Fuente, an exhausted Merckx crossed the line. The Giro was saved for the Cannibal, but Fuente had proven that was a great champion too.

Italy enjoyed the moment, and Torriani was very proud of the Spanish " armada" who was fighting Merckx in spite of the superiority of the Belgian.


Four days later, Merckx entered Milan as the Emperor of the Giro, his third overall victory, tying myths such as Brunero, Bartali and Magni.

The final classification was ( Source : http://es.wikipedia.org/wiki/Giro_de_Italia_1972 )


And the most important thing, Fuente had discovered that this was his race, in spite of the victories in France or the 1972 Vuelta.

A Spanish podium in the Giro, second and third, the best giro ever for Spaniards, Fuente and Galdos ( among others) have shown Spanish supporters that Italy was not a forbidden land for them.

1972 had witnessed the first real fight between Merckx and " El Tarangu", but not the last ...