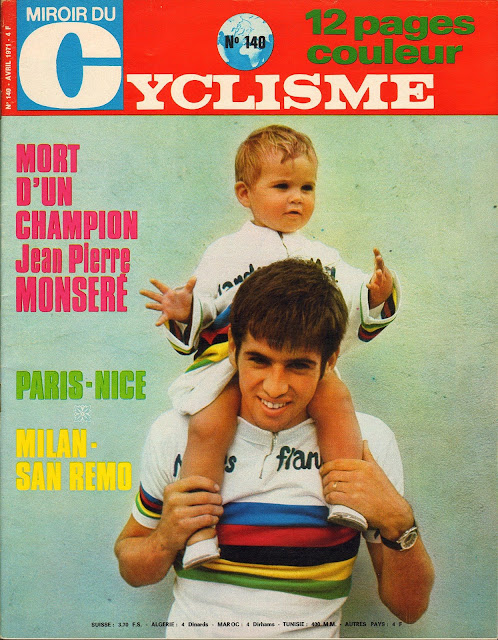 Jean Pierre Monsere was born  the 8th of September of 1948 in Roeselare, Belgium, and was supposed to be a new Merckx, at least in classics and Worlds, but he had no option.

The fifteenth of March, 1971, he died after being run over by a car while training.

He was a young promise from the same town than another Belgian pro, Patrick Sercu ( who was a superb track rider and a good "pro" rider too)

Jempi ( as he was known) turned into "pro" with the mythic Flandria team in 1969, a year when everybody was speaking about Merckx, especially in Belgium.

He had very good perfonmances and won a monument,the " giro de Lombardia", after being disqualified the winner ( positive drug test) Gerben Kaerstens...

And in 1970 he showed a very good condition, winning two stages in the " Vuelta a Andalucía", and good position inspring classics ( 8th in G. Wewelgem, 6th in Flanders, 10th in Paris Roubaix and 8th in Flecha Wallona) and a third position in the Belgian championship, behind Merckx and Van Springel.

But his moment to enter the history of cycling was still to come, in August, in Leicester, where the World championship were held.

It was a flat ciruit, and the favourites were the Italian roders Gimondi and Dancelli, the German Altig, the French Guimard, and the Belgian team with De Vlaeminck, Merckx and Godefroot ( Monsere was just another rider).

There were 270 kilometers, with 18 laps to a flat circuit in a very cloudy and windy day.

The first laps were relaxed till Merckx started to accelerate in the 4th lap.

Then was time to attacks and counterattacks, and after a hard fight the Italian team took the control with dangerous attacks involving Dancelli, Motta and Gimondi, and in the 10th lap a very dangerous breakaway was formed, withou Merckx ... but with Monsere.

Time was passing , with advantages from 30" to 2 minutes for the breakaway. And in the 13th lap,not happy with the gap, another attack of Gimondi selected the race definitily.

Gimondi, Vasseur, Mortensen, Monsere,Roussel and West were going to fight for the rainbow. Behind them things were not clear and Gimondi´s effort made the breakaway possible. With a lap to go the gap was a minute.

An angry Gimondi was leading the front grou with no help

And Monsere took his moment with two kilometers left. He attacked and there was no reaction. There was a new world champion

Mortensen was now reacting and sprinting, but only for second...

He was the second youngest world champion after another Belgian, Karel Kaers, in 1934.

Joy for Monsere, dissapointment for an angry Gimondi who was accused by Monsere, who said the Italian tried to buy him.

Merckx finally just could be 29th, and de Vlaeminck 8th.

Now he was one of the greats, and in 1971 he started strong, winning the Vuelta of Andalucia

But tragedy was going to break the career of this Belgian talent.

The fifteenth of March, Monsere died while riding  ...

The funeral was incredible and very moving ...

De Vlaeminck was devastated, Zoetemelk could not hel the emotion, and merckx just asked to reporters to leave him alone ... even Gimondi said that he was a true champion.

But tragedy pursued Monsere´s family and 5 years later his 7 year-old son Giovani died after crashing with his bycicle to a vehicle, Giovani´s bike was a present of another champion, Freddy Maertens.

Maertens could never recover from these two tragedies, so when he won his two Worlds, in 1976 and 1981, they were dedicated to Monsere and Giovanni


An emotive story for one of the talents that could not show all his potential.