Greg Lemond. One of the greatest. Part VII, the last one.


A new season, 1991, an old objective, the Tour. Lemond had a similar approaching to the Tour than in 1990. Bad results and no victories. But with Lemond Mathematics did not matter.

The 1991 edition had a discreet route, with two lon time trials but only with two real mountain stages, the queen stage in the Pyrenees, finishing at Val Louron and the one of Morzine in the Alps ( the Alpe was again in the route but in a nearly flat and short stage) .

And the Tour started as usual, with Thierry Marie winning the prologue, and with the Banesto squad distracted. Delgado and Indurain didn´t react to a dangerous breakaway including Breukink and Lemond. It couldn´t be real but it was. 1'44" for Lemond and Breukink in the first stage, too much indeed.Lemond was the new leader.

The Spanish press criticized Indurain and especially Delgado, who was reincident in big distractions.

Nothing important happened till the long time trial of Alencon who won Indurain, with Lemond second, however the most important event was the retirement of the PDM squad before the Pyrenees in strange circumstances.

The first stage in the Pyrenees was again disappointing for Spanish riders who didn´t attack and allowed a dangerous break with Mottet and Leblanc. The first won the stage and the second took the yellow.

And then came the queen stage of the Tour, from Jaca to Val Louron with the climbs of Pourtalet, Aubisque, Tourmalet , Aspin and Val Louron.It was going to be a legendary stage and the beginning of a new dynasty.

There were early attacks, and the Italian riders , Bugnon and Chiapucci, with the leader Leblanc attacked in the  climb of the Aubisque.

However the key point was the col du Tourmalet. Lemond attacked on the first slopes, Delgado dropped and Chiapucci, Bugno, Indurain resisted in a group of ten units. In spite of that, in the last metres Lemons suffered and lost contact 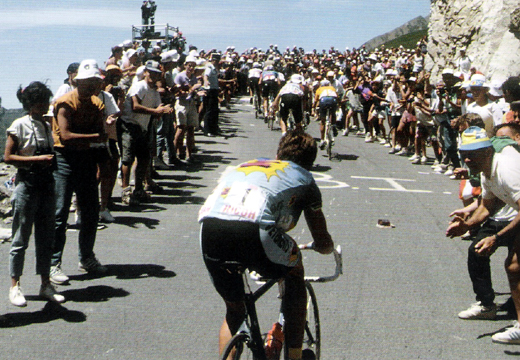 It was an important moment because when Lemond rejoined the group on the descent, Miguel Indurain had scaped.

Fignon rejoined in the valley before the Aspi , but Chiapucci was ahead too, and now they were leading the race. Behind them, Bugno realized his mistake, the Italian had lost the Tour.


Lemond suffered behind during the Aspin and Val Louron, and lost more than seven minutes to Chiapucci, who won the stage. Indurain took the yellow...............for five years in a row. 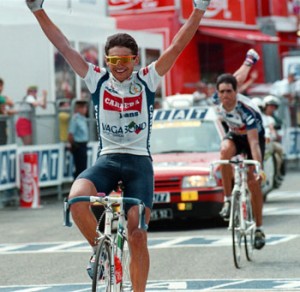 In the Alps Banesto controlled the race with a great Jean Francoise Bernard, and Lemond showed that the Tour was over losing time in the Alpe stage,

that won Gianni Bugno. It was only a victory for a rider that knew that he had lost a fantastic opportunity to win the Tour ( his best ever).


At the end of the Tour Lemond was 7th overall. He would never succeed in France.

In the 1992 season he won the Tour du Pont and was again in contention for the Tour but after a good half of the Tour, scaping with Chiapucci, Holm and Jalabert in Bruxelles.

However the most important stages were to come, and Lemond lost 4 minutes to Indurain in Luxembourg and 49 minutes to Chiapucci in Sestriere. 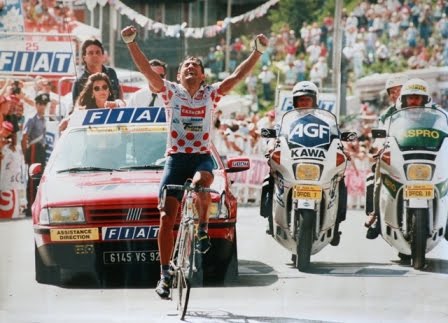 He would retire the following day, in a stage that 6 years before had been hisconfirmation as Tour leader, Alpe d´Huez .

In 1993 he signed with the GAN squad, but he wasn´t the same and obtain no results.

But he quit it. He announced his retirement of professional cycling.


One of the greates quit cycling, this smiling American would be remembered because of his duels with Hinault, Fignon, Kelly, Argentin,Delgado,Indurain,etc.
He was critiziced because he coincided with very aggressive riders, such as Hinault and Fignon, and he wasn´t. But he was a very inelligent one, and fought hard to win races, to recover from the hunt accident.

Thanks Greg, you belong to a golden era of cycling, thanks for all