An important situation happened in the way to Termoli, a crash in the last kilometre where Roche was involved affected him in the leg and back especially ...

The following day he lost some seconds to Visentini, due to an attack of the Italian in the day of his birthday.

... and told the press that he was still suffering due to the crash, and that he would see his form in the time trial of San Marino. It was said in some places that Roche was going to quit the giro ... totally false ..

The fourth of June there was a very tough time trial

And Visentini took advantage of Roche´s pains, winning the time trial for nearly 3 minutes to Roche ( who was eleventh) and 1'11" to Rominger who was second, and now third overall. It had been a good day for two dangerous riders. The climbers Millar and Lejarreta performed very well.

There was a new leader, Visentini , and the overall stood like this ... 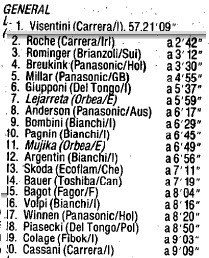 The giro seemed to be finished, but Roche was furious and he planned an attack with his mate Scheppers in the day of Sappada, two days after the time trial ( they thought that Visentini wasn´t expecting an attack in that stage and he perhaps would be tired of the San Marino stage).

Roche took advantage of an attack of Bagot in Monte Rest and left the bunch on the descent joining Salvador and Bagot who punctured.

Behind them Boifava and Visentini panicked and Carrera chased Roche. Boifava moved to the front to make Roche stop, but the Irish refused, and Carrera continued chasing. The argument between them was terrible, but nobody gave in. What could have been a good moment for Carrera to leave responsability on Gewiss, Panasonic and others, turned into a very polemic moment and stage. The key moment in the giro.

In the following climb Roche was caught by some contenders like Bernard, Lejarreta or Millar and Carrera exploited.

Visentini had to look for alliances and finally , on the last climb, with Van der Velde in front in a breakaway, the group rejoined...

However Visentini was not having a good day, and i the last 10 kilometers he lost contact with the favourites 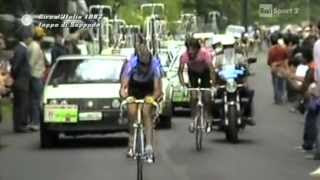 And in front, Van der Velde won the stage, 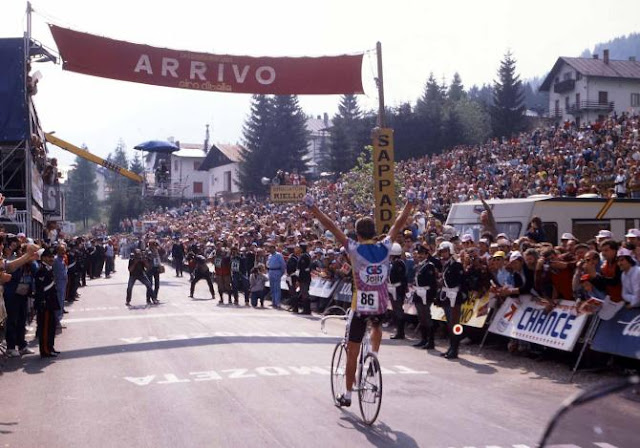 with Roche suffering in the last 5 kilometres, and saving a rosa that Visenitni was losing by a ridiculous margin to Rominger, 5 seconds.

Only 5 second separated Roche and Scheppers ( who refused in the last climb to help Visentini instead of Roche ) to be expulsed from the giro by the Carrera team.

Visentini arrived at the finish line looking at the podium , and losing nearly 6 minutes to the favourites and nearly 7 to the winner Van der Velde ... the giro was lost for him... 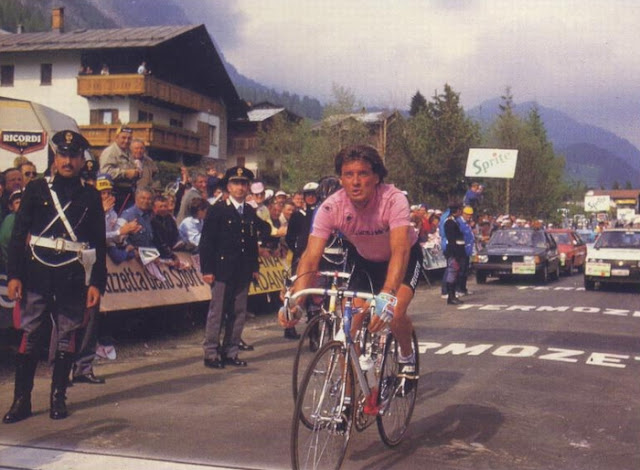 and saying that "someone was leaving the giro that night" ... he would not be obeyed.

The new overall was 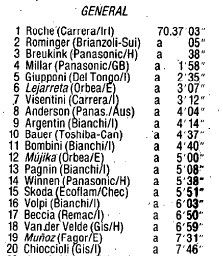 The press named Roche as Judas, his mechanic as Satan, and Eddy Scheppers the rebel. The giro was going to be hell for them in the rest of the stages.

And the following day there was a terrible stage, that was called " the Marmolada massacre". The stage was very difficult for Roche , who was spitted and insulted during the stage by Italian espectators. Besides that, Visentini attacked him in some occasions, but Roche , who was helped by Millar and Scheppers resisted.

The stage went again to Van der Velde , and the most damaged rider was Rominger that lost more than a  minute to the "principals".

Rominger would lose more time in the following stage of Riva del Garda, and lost all his options in the way to Madessimo. There were an important mountain stag to Pila and a time trial and Visentini had not surrendered yet.

Jean Francois Bernard who was recovering his sensations , won the stage, with all the favourites, but Rominger, together.

In spite of Visentini, Roche only had one rival on mind, Erik Breukink. Breukink was a good time triallist and he was a threat in San Vincent.

So, in the stage of Pila, on the last climb, Roche forced and dropped Breukink and Visentini , who crashed . Lejarreta and Millar were the only ones to resist 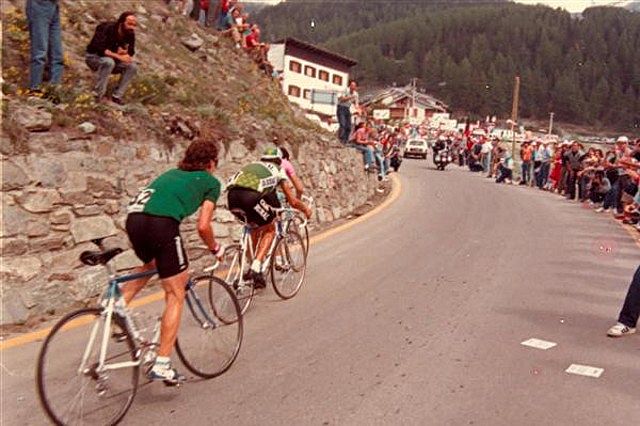 And finally Millar won the stage and took the second position overall, with Lejarreta third and fourth overall ( the Spaniard would be in pink without the team time trial).

In the podium , Roche was still being insulted, and reacted silencing the tifossi...

That evening Visentini quit , because of the crash, but Roche had the giro won. He would win the last time trial reafirming his superiority in a very controversial giro.

The final podium was Roche, Millar and Breukink, one Carrera and two Panasonic riders ( Panasonic was the best team with two more riders in the top ten, Anderson and Winnen). The Spanish climber Lejarreta was finally fourth.


Roche had won the giro, later that year he would win the our and the worlds, tying the great Merckx, that won the triple crown in 1974.


The great Gino Batali was closed to Roche in the celebration.

A great season that unfortunately Roche couldn´t repeat ... injuries and luck had been spent during that magic season. The duel with Visentini would remain in cycling supporters forever ... Visentini would never be the same either.

It had been a casuallity that after the duel Lemond - Hinault of the 1986 Tour, we had witnessed another duel, a similar one, just months later.

One of the most exciting Giros ever had finished, with a fair champion ( in Francesco Moser´s words) that had been supported during the race by the " patrone" Torriani telling him ...