Coincidentally he didn´t win in Via Roma those years. Roger de Vlaeminck won his first San Remo in 1973 and Gimondi his only one in 1974,with the rainbow jersey


Two years were enough for Merckx, who had not taken part in those editions due to illnesses.

The beginning of the season was very good for Molteni squad , who had not only Merckx, but Joseph Bruyere, in very good shape


Bruyere had won the Mediterranean tour and the Het Volk, and he was decided to help Merckx to tie Girardengo.
It was a very tough race that 19th of March, 1975, due to weather conditions. Cold and wind hit the riders.

There were several attempts from the start, including an early break from nearly all the contenders ( with Merckx of course), that finished in the 100 kilometre.

The French rider Raymond Delisle tried to achieve a glory day but was caught too, and finally the victory would be disputed on the Poggio climb.

There were some attacks in the Poggio but the most important one included the young Moser and Bruyere, who reached the summit of the Poggio with some seconds to Merckx who was leading the bunch. Merckx risked on the descent and contacted Conti, Moser and Bruyere.

Then Bruyere helped him to have a good position in the sprint ( with the bunch just 200 metres behind). Moser was the first to sprint but Merckx passed him winning his sixth San Remo, an incredible achievement , in only 8 participations. He had tied Girardengo. Moser was second and Bruyere fifth.

Tiffosi were disappointed, another nearly victory of an Italian in Via Roma, and the record of Girardengo tied. Merckx had won by half a bicycle 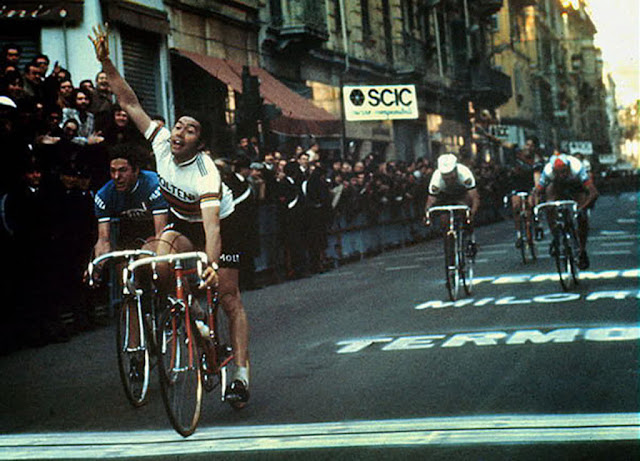 Days later he won Amstel Gold Race, Liege and Flandes, being second to De Vlaeminck in Roubaix. An incredible achievement.

That July Merckx lost the Tour to Thevenet, he just could be second. Thevenet take the yellow in the famous stage of Pra loup where Merckx had a " fringale" in the last kilometres. He also suffered a hit of a spectator in the Puy de Dome and a terrible crash in Valloire with Ritter. In spite of all he finished second.

When the 1976 season started , there were several doubts about Merckx, he was not winning as much as usual.

It was a controlled race, and in the last 50 kilometres Merckx attacked several times , but was caught, it seemed clear the he has not the power of previous years. But on the Poggio, Merckx attacked again and the doubts of his Belgian rivals, De Vlaeminck and Maertens allowed him to open a gap that was only closed by Jean luc VandenBroucke .

The final classification was:

It was the last great win of Merckx career. He would come back in 1977 but was not a real challenger.

Merckx quit cycling in the early part of the 1978 season, and that San Remo is remembered as his last major win.

A record of seven victories that remains unbeatable still.

And here finishes a good romance between the best rider ever and the Classicissima.

Thanks for all Eddy
Publicado por pedrofbs en 18:52