Merckx, the last dream. Part I.

In the previous day to the Alpe, some rumours were saying that an important rider had tested positive in the mountain time trial to Morzine Avoriaz ... Zoetemelk was the one everybody pointed ...
At the end of the stage of Chamonix Merckx was chosen to pass a control, he couldn´t pee and he was forced to drink two litres of water, that was not a good thing for his disentery ... would he suffer the consecuences in the following day :


A boring but non clear Tour, that was going to reach it´s turning point, a stage that would enter the history of the Tour with golden letters ... 19th of July 1977

Jacques Godet was terribly angry wih riders, the lack of fight during the Tour was annoying him a lot. He was thinking in more trials, in bonus for brave riders, and several methods ... and then the stage started ...
Hot, hot and hot, it was going to be a terrible day for cyclists.
The start was relaxed, Peugeot controlled the situation easily knowing that the difficult moments were still to come.
When the bunch got to the foot of the Madeleine, nothing important had happened, and the shadow of the dissapointment flew the Tour.

Thevenet had things under control

No movements, no fight, riders were spoiling the queen stage, it couldn´t de possible. When the peloton crossed the summit all the favourites were together, even a Merckx that seemed to be suffering due to his stomach problems. He had been a good part of the climb in the last positions with a bad face ...
But things was going to change, and Glandon would damaged riders, and destroyed the field.
After suffering since the first switchbacks , with more than 12 kilometers to the summit, the surrender came.


We were witnessing the end of Merckx aas a real contender.

It seemed that he was going to quit, he was suffering , he was struggling without possible redemption, would he get off the bike?... you know the answer, he was dropping , but he was the best champion ever ...
Meanwhile, and with Merckx losing more than two minutes at that moment, the key movement of the Tour happened.
With more than 7 kilometers to the summit, a brave and courageous Van Impe attacked 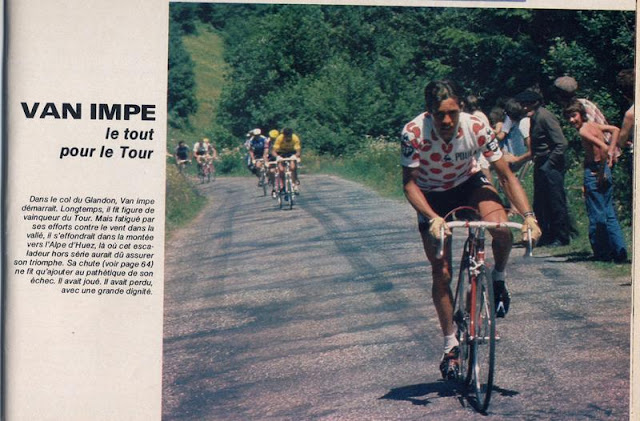 Thevenet tried to respond but couldn´t. Van Impe was flying to the summit as he had done the previous year in a scape that gave him his first Tour

The rival now was not Zoetemelk but Thevenet, a braver rival, but Van Impe was riding hard and the advantage was increasing little by little.

Behind the favourites Merckx struggled, but people were cheering him, only some years ago they used to insult and shout at him because of his superiority, now they were recognising the heart of a true champion

The other character of the day Van Impe was increasing the lead, and the advantage was 1'10" with a kilometer to the summit to Thevenet, Kuiper and Zoetemelk, more than 8 to Merckx... Thurau was suffering too... 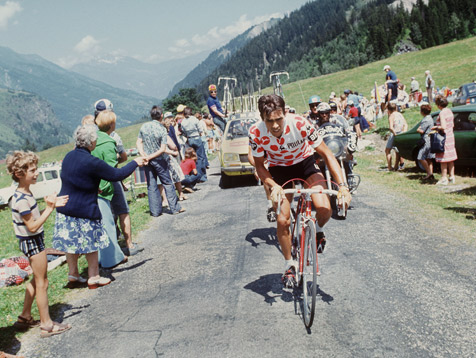 Finally we were having a great day in the Tour,, with more than 50 kilometrs to the finish line, the field was destroyed and Van Impe was making his dream of a second Tour closer. At that moment he was the virtual yellow jersey with a little less than a minute.

The differences in the summit were clear. Van Impe first, 1'25" to Thevenet, Zoetemelk and Kuiper, Galdos and Heredia were losing more than two minutes, Thurau more than 5 and Merckx more than 10 minutes.
That was a queen stage of the Tour, an epic and historic one, and the best was to come ... even though the dream of Merckx had finished in the early slopes of the Glandon.


In the valley, Van Impe pushed hard and increased the gap to 2'45" to Thevenet, Zoetemelk, Kuiper and the Kas couple ( Galdos and Heredia) that had regained contact to a trio, where only Thevenet chased.

The Tour as in the air, Thevenet was furious but he knew that he had to chase like a champion ... behind them Merckx was losing more than 13 minutes, his dream had gone.

While the time passed Van Impe was losing time little by little, and Thevenet was forcing the pace, again with kuiper and Zoetemelk on his wheel... Galdos and Heredia had dropped ...

Behind them Merckx was recovering himself and was performing a ssufering but good climb, with the support of the spectators.


Thevenet was closing the gap with Van Impe, but Kuiper was saving energy, he was only 49" ahead of
Thevenet and he knew that Thevenet was spending so much energy...

... with 5 kilometers to go Kuper jumped leaving Thevenet and Zoetemelk without answer

Thevenet knew it was a difficuolt moment, and  forced the most, leaving Zoetemelk behind

Kuiper was openning the gap ... 10", 15", 20" ... it was turning a dramatic situation and besides that a brave Van Impe was still leading the stage with more than a minute.

It was not going to last, with a little more than two kilometters to the line a car threw Van Impe

He was helped but he knew a new wheel and his car was not there, suddenly kuiper passed him, some seconds later Thevenet passed him too, while Van Impe shoutes at the French that Kuiper was near.

Van Impe had been brave, but bad luck had spoiled his ilussions. When he started riding again Kuiper and Thevenet were out of sight, and he was really tired.

But the drama was still on, with 48" to Kuiper with lss than a kilometer to go, and Thevenet trying his best.
Finally Kuiper crossed the finish line, he had won a great stage with 6 hours and 6 seconds, and he could take the yellow fron Thevenet

In his own words, that day he was pushed to the limit as never before (and never later), but that day he had won the Tour.

2'06" behind Kuiper Van Impe crossed the line, 2'59" was Galdos, Zoetemlek , 5th, nearly 5 minutes ahead of Kuiper and the others more than 8 minutes later, without doubt one of the greatest days in the Tour history.

But we were waiting for Merckx, before him Thurau fell in the last bend and arrived the 17th, 12'32" ahead of Kuiper and Merckx crossed the line in 20th position with a delay of 13'10". He had done the best climb to the Alp. Incredibly he had recovered from pain and suffering in the last 14 kilometers.

In spite of that, he was exhausted too

Merckx was still in the top ten, and the next morning he was saying that he would come back to the Tour again ... to win ... Merckx was still dreaming but, the 1977 edition would be his last appeareance in the Tour.

Riders were going to take it easy. Not Merckx, ashamed of his bad Tour.

It was a quiet stage but Merckx attacked, he was caugh and then Agostinho with more than 90 kilometers to the finish line attacked to be ahead of all the riders during all the stage.

Behind him Menendez and Merckx scaped and at the end of the stage Agostinho won, Menendez second at 3'17" and Merckx 3rd at 3'19".

Merckx was now sixth because of the advantage to the peloton ( the peloton arrived 7'59" behind Agostinho).

Nobody knew but this stage was going to be the last win of Merckx, it is sad but it is the last important win of the Belgian champion. Days later Agostinho and Menendez were disqualified for doping and the stage passed to Merckx. Not the stage all had dreamed, a stage that does not count for Merckx.

After a stage win for knetemann, came the important time trial to Dijon where Kuiper and Thevenet were going to solve the Tour. Just 8 seconds for the French and the man in yellow after that time trial would win the Tour.

Meckx was trying to win a stage, but was just sixth after a great Thevenet

who won the stage, and more important, the Tour. Kuiper performed well, being third and losing 28" only, but the Tour was over.

Knetemann would win again in Versalles and the last day there were two stags. A short time trial that went to the powerful and young Thurau, with kuiper losing 9 more seconds and Merckx losing the opportunity of winning a stage, for 9".

It was Thevenet second Tour, and above all, it was going to be the last Tour of the greatest, Eddy Merckx.
Images like the following,were not going to be repeated. After his tyranic years, we were going to miss him ...