We will start with information about the 1985 Tour in oder to understand all the thriller of the 1986 edition, and I hope you will enjoy it.

We have to say that the previous Tours ( 1983 and 1984) were won by the great Laurent Fignon. Fignon humiliated Hinault in 1984 ( Hinault had changed team in favour of the La Vie Clair of Bernad Tapie. His relationship with Guimard was totally broken), especially in Alpe D Huez., even though Hinault didn´t surrender.

The stage was won by the Colombian climber Luis Herrera an Fignon became the new leader. One of the most historic photos is the one with Fignon leaving Hinault on the slopes of the Alp......

Hinault had been defeated, but he will come back.

Fignon destroyed the field in the Alps and won his second Tour in a row with a power that reminded people to Meckx´s era.

The Tour finished and cycling was scared about a dominance of Fignon, but he was injured at the beginning of the 1985 season and lost all the important races.

Firstly, he won the Giro easily, with the young american, his former successor ,Geg Lemond in 3rd position.

But Hinault was looking for another double in a Tour that suited him pefectly. Long time trials and only two real mountain stages, Avoriaz in the Alps and Luz Ardiden in the Pyrenees, a new climb,A STEEP CLIMB:

The 1985 Tour started as it was supposed, with Hinault in great form , winning the prologue and the first I.T.T to take the yellow jersey till Paris..............but it was not as easy as it can be thought.
Hinault scaped with Herrera in the Alps and the yellow jersey was safe, only Roche and Lemond were real contenders and they wer far in the overall ( and Lemond was his domestique ). But Hinault fall in Saint Etienne and nearly quitte the Tour. Lemond had reduced the difference and the Pyrenees were still to come.

Hinault suffered in Tourmalet, while Roche, Lemond and Delgado left the bunch. Herrera helped the badger but it was not enough. They pased the Tourmalet and Delgado went alone with his mate Cabestany, and Roche was riding hard. And the important moment came. Lemond spoke to his coach Le Guilloux to ride, and it was denied, he was lied tha Hinault was close.
Lemond got angry but accepted the situation.....Hinault was the leader and he was not losing so much time.
Finally Delgado got the stage by some seconds to Herrera and Roche and Lemond were caught by a group.......without Hinault. Hinault finally arrived with more than a minute los t to Lemond and Roche.........Lemond realised he had been cheated, he wanted to abandone the Tour.
Ther was a ver hard polemic. Hinault had to promise him tha he would work for him in the 1986 Tour. Lemond accepted and won the las ITT by a small margin to Hinault. Roche was third in the overall ( he had won the second stage on the summit of the Aubisque).

1985 Tour was over, but the " war" had nearly started. Hinault promised he was going to work for Lemond the following year dn the American would become the first American to win the Tour ever.

After the Tour Lemond tried to forget his non winning races with the World Championship ( it would have been his second one after the 1983 edition) but a " youngster", the Dutchman Joop Zoetemelk won it with 38 years old, Lemond and Argentin completed the podium 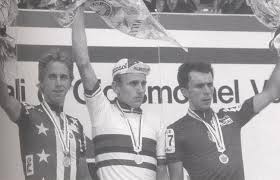