Merckx is the best cyclist ever, he won all the races he took part in ( but Paris Tours) and he is remembered because of his 5 Tours, his 5 Giros, his 3 worlds and for his victories in classics.

So we are going to write about his favourite classic, San Remo, with the Poggio climb and the Via Roma avenue

It was his first big victory too, as a profesional rider. He had to leave Solo Superia due to the relationship with Rick Van Looy, and he signed with Peugeot....... 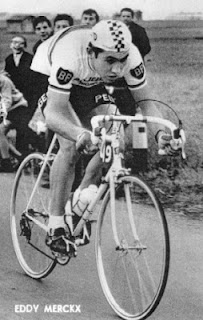 When Merckx rode San Remo ( known as La Classicissima ) in 1966 he was not a favourite, he was still a promise but he was not a considered rider.

It was hard for a young rider too, because the length of the one day classics, and specially this one was close to 300 kilometres ( 288 km in 1966).

Merckx attacked in Capo Berta, rode with Poulidor in the Poggio climb 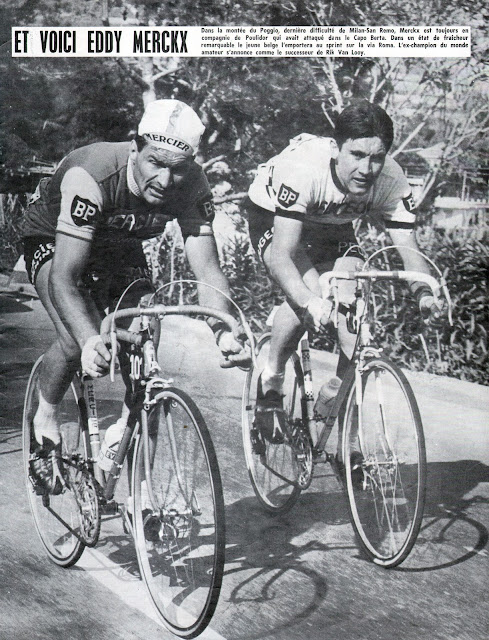 and took part in a 11 men breakaway arriving at Via Roma. There were great riders in the break, such as Poulidor, Aimar, Mr Burdoux-Paris, Herman Van Springel, and more good riders. But the young Belgian outsprinted all of them, winning with superiority.

With only twenty years old, Merckx had his first monument ( a lot more would come later).

In 1967 he was a rider to take care of, but the world of cycling was still awareness of the force that was coming.
His previous win was considered a mixture of luck, good day and taking advantage of a surprise -rider-status.

So when Milan San Remo 1967 started he was not the favourite yet..............Italians were expecting a victory after 13 years of foreign victories. Felice Gimondi was one of the favourites.

But the inevitable happened, the young Belgian outsprinted the three Italian idols in Via Roma. 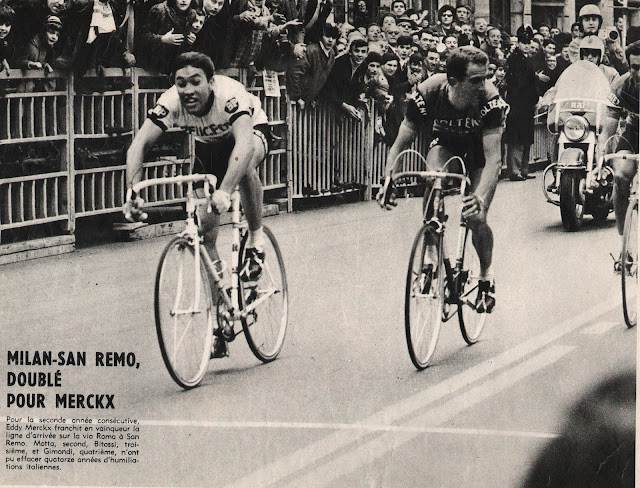 Spectators were confused, the 1966 victory hadn´t been casual, that Merckx was a good rider.

When Merckx faced his first Giro in 1967 nobody trusted him for a victory, it was only his first grand Tour.

Merckx won two stages ( including one mountain stage in the Blockhaus), and finished in a very good 9th position.
The Italian journalist would say the Merckx would never win a major Tour....................he´d better closed his mouth...........

The year finished with the triumph in the Worlds, in front of Janssen and Saez 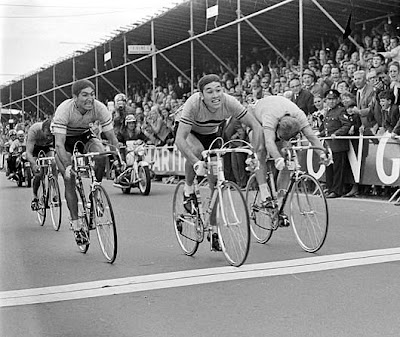 His first World Championship, with only 22 years old. That autumn he signed with an Italian team, the Faema squad.

Surprisingly ( in words of Gimondi, Godefroot and others) he was still considered a good rider but not a threat.

In 1968 he was just 31st in San Remo, he was suffering the surveillance of his rivals, the rainbow jersey was an easy target.

That year Mercks won his first Giro, with the legendary stage of Lavaredo, and suddenly the world of cycling noticed something was happening..............a cannibal was coming.

Merckx would make his  revenge in San Remo the following year. He was now the number 1 ( in spite of not having a Tour yet), with the Roubaix and the giro in 1968.

And he was marked during all the race, it seemed tha nothing mattered but Merckx loss. But the Belgian was the strongest and attacked later in the race to win, entering alone in Via Roma with some seconds to another promising Belgian , Roger de Vlaeminck who led the main field.

After this " easy" victory ,  experts started to worry about this phenomenom, who had tied Coppi with three wins in Via Roma. It was clear that his target was the record of 6 victories of Girardengo.

"Merckx seems to fly. I don´t see a rider to beating him at the moment". Jacques Anquetil.

That year Merckx was expulsed of the giro in Savona when he was the pink jersey and the only favourite. That was the only motivation Merckx still needed.........that July he annihilated the field winning by a huge margin to his old mate Pingeon by nearly 18 minutes, and leaving the Mourenx stage for cycling history .

The 1969 year he won two more monuments, Liege and Flandes, he needed only Lombardia to tie his nemesis Van Looy as the only riders to win the five monuments.

Three San Remo, a superb performance, in 4 years. He was the chosen to beat all the records in classics. And Milano San Remo was going to be his prefered Kingdom.
Publicado por pedrofbs en 21:07