The Lance Armstrong story. Part I.


The first important thing he won in professional cycling was the 8th stage of the Tour de France 1993, from Chalons sur Marne to Verdun, 184,5 km.
He had been a very promising athlete and that was his first important win, at least for me . I was just 16 years old and those were the first news about that American talent.

Besides, he won the stage t in fron of experimented riders such as Alcala, Pensec, Arnoud, Perini or Roche, with just 14" to the bunch, lead by Mario Cipollini...


He would quit the Tour later, it had been his first big Tour, and with 22 years old, he had won a stage, was he Lemond successor?

He took part that year in the worlds. He was not favourite at all, but in a very bad day , with a terrible weather, Armstrong attacked during the last kilometres and took by surprise Indurain and the other favourites like Fondriest, winning the Worldchampionship of Oslo. We know could say that he was following the sucess of LeMond .


It is funny, but Armstrong later rival, Jan Ullrich, was the winner that year in the Under 23 competition

Behind him, Indurain was faster than the sprinters and earned the silver medal, with the German sprinter Ludwig in third position .

The following year, Indurain and Armstrong were the main characters of another moment, not a good moment for Armstrong. It was during the individual time trial of Bergerac that Indurain won ( in one of his best days as a cyclist). Armstrong was passed by Indurain... 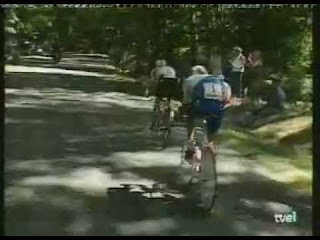 Armstrong would finish in 13th position, "just" 6'23" ahead of Indurain. He would abandon the Tour before the Alps.

The 1994 season was not a very good one for Armstrong. However the 1995 was a more succesful year with victories in a stage of Paris Niza, Tour du Pont and Clasica San Sebastian


In spite of that his most important win was in the Tour ( the first he finished in 36th position), because he had been second to outschakov i a previous stage , and he wanted to dedicate a victory to his mate Fabio Casartelli who died in the stage of Cauterets due to a crash in the Portet de Aspet

It was a flat stage tha tfinished in Limoges, and Armstrong attacked in the final kilometres surprising his breakaway partners. He arrived alone at Limoges dedicating the victory to Casartelli...


It was a win that Armstrong had deserved during the race and so had Casartelli...

When the 1996 season started it was clear that Armstrong was a mature rider, and he was a very good rider for classics and one day races, as he showed winning Fleche Wallone


He won the Tour du Pont again , but that summer he was not feeeling well and a nightmare left Armstrong shaken in October, he was suffering cancer...

It was going to be a hard fight to survive, he didn´t have a big percentage of living, less than a 40%, but he was very stubborn and was going to win. It was a miracle.

He had signed with Cofidis in 1997 but didn´t race and finally signed US POSTAL to ride in 1998 .

So, in the next parts we well write about the tirany of Armstrong in the Tour,an obscure period, but some moments were very interesting and there were great moments of cycling.

In fact he was not going to be the main character of the 1998 season ( a great Italian climber would be), but we are writing about Armstrong and we will see more soon ...