Greg Lemond, one of the greatest. Part IV.

When the 1986 season started, Lemond was ready to win his first Tour. However he didn´t have wins, only good positions, such as 2nd in San Remo behind Kelly,  4th in Flecha and 11th in Flandes. The lack of victories increased the impatience of Tapie with his American star.

When the Giro came in May, Lemond was the only leader of la Vie Claire and the favourite for the final win. Un fortunately a crash in the first stages and the lack of good mountain stages unabled him to improve his third position of 1985. He was only 4th, with a stage win, more than two minutes ahead of the winner Visentini.


Before the Tour he had again good positions, being third in Switzerland, where his mate Hampsten won.

But he was focused on the Tour and Hinault promise. Curiously when the Tour was getting closer Hinault was refusing in some way of helping Lemond, saying that the race would put every one in his place, especially the first long time trial.. It was a very tough Tour with very tough Alps, and the French press was selling the Tour as a fight of Fignon and Hinault. Things were not going to be easy for Lemond.

To make it more difficult the Guimard squad, the Systeme U of  Fignon started the Tour amazingly, winning the prologue with Marie and winning the team time trial by nearly two minutes to Vie Claire.
Lemond was very angry with Hinault because he performed bad and slowed the pace of the team.

Things would be sorted in the time trial of Nantes in the 9th stage. Unfortunately for Lemond he had a puncture and could only be second to Hinault. Fignon had a terrible the day and the Tour seemed difficult for him.He had lost nearly 4 minutes to Hinault. Millar and the Carrera couple Roche and Zimermann were now the best placed rivals.


The leader was still Pedersen from Carrera, but the Pyrenees were coming. The first stage there consisted in a difficult stage with Burdinkurutzeta and Marie Blanque, and Hinault ( who was riding his last Tour) wanted to play with the field and put a high pace in the fisrt climb dropping Fignon and Roche, but more surprisingl he attacked in the valley and Lemond was caught distracted. Delgado who had joined Hinault won the stage in Pau with Lemond more than 4 minutes ahead. Hinault was the new leader ( the 8th Tour with at least a day in yellow )

Hinault was the new leader with more than five minutes to Lemond, who was very angry and admitted in the finish line the mistake of being Hinault´s mate. He should have signed for another team.

The following day included Tourmalet, Aspin, Peyresourde and Superbagneres. It was the queen stage of the Pyrenees.Hinault had the Tour, he only had to control the race.............but he attacked again on the descent of the Tourmalet. He was trying to emulate Merckx in Mourenx 69. Lemond was shocked. Hinault was not helping him at all. 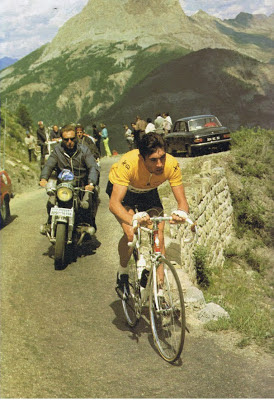 Hinault led the race, catching Arnoud who was in an early break, taking advantages close to 2 minutes. But finally he suffered during the ascent of the Peyresourd and was caught just before Superbagneres by a group with the favourites Millar, Herrera, Zimmermann and Lemond

It was Lemond´s time, the group dropped Hinault and Lemond attacked


winning the stage by more than five minutes to the badger.


Hinault was still the leader, but the gap had been reduced to less than a minute.
When the Alpine stages arrived la Vie Claire was in a great internal war. Luckily for Lemond, Hinault suffered in the stage that ended in the col of Granon and took the yellow , his first yellow, by more than two minutes to Zimmermann and Hinault. But Hinault had not surrendered. And if he wanted to enter the history of cycling ( even more) he was going to achieve it.

The next stage to Alpe Dhuez was the quen stage of the Alps.

...and not surprisingly Hinault attacked on the descent of the Galiber dropping everybody. Lemond had to couterattack with Bauer and Cabestany and joined him in the valley before Croix de Fer.

Hinault was taking the second place, because Zimermann had been dropped , and then one of the greatest moments in Tour history came..........the break of the mates from the Croix de Fer to Alpe D´Huez. Cabestany and Bauer couldn´t resist their pace......... 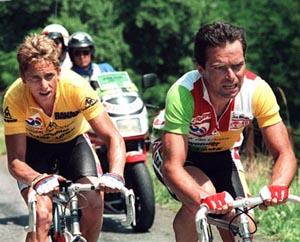 
Zimmermann had been distanced more than four minutes. The la Vie Claire couple were now first and second of the Tour.

However Hinault insisted that the Tour was not over, and that the time trial of Saint Etienne would decide the winner. Lemond was furious, he felt betrayed by the French but could keep the yellow by a big margin in the ITT ( second to Hinault by less than 30") and increased the gap on the Puy de Dome.


The Tour finished with the first American winner , Greg Lemond. Hinault was second and Zimmermann third. 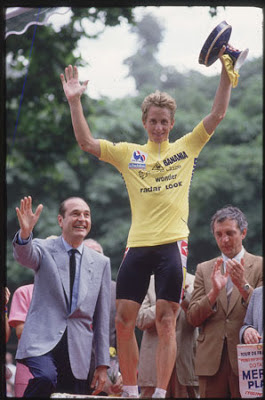 Lemond was complaining about the attitude of Hinault. In spite of that Hinault was saying that he had helped Lemond during the Tour using the strategy of eliminating rivals. Whatever happened the spectacle had been great.

Days later the had another fight in the Coors classic in America. Now was Hinault turn to complain about Lemond attitude. He said Lemond was attacking him to avoid his victory. Finally the came in another one-two positions with Hinault the winner.

It was his last win.

That November Hinault quit cycling and it seemed that Lemond would dominate cycling  if Fignon did not recover. But life is not like Mathematics and 1987 was a very different year.