Greg Lemond . One of the greatest. Part V.


1987 was going to be the confirmation for Lemond. He was now the reference and he was a great cyclist.. But he started the season with an illness and then the 20th of April, his life changed. He nearly died while hunting.........


His brother in law shot him and he nearly died. 1987 season was lost but Lemond had survived.
He changed to PDM in 1988, but he didn´t succeed

He was thinking in retirement, but signed with ADR, and had some good results in Tirreno and International Criterium.
He took part in a giro that another "comeback man" won, Laurent Fignon. Fignon won his first big Tour after the magic 1984.

Lemond was only 39th overall but was second to Piasecky in the last time trial and did a good last part of the giro.

Fignon was favourite to win the Tou now ( along with the former winner Delgado), but Guimard was worried and told Fignon after the time trial of the giro that Lemond would be a very serious rival in the Tour.


The Tour started with a distraction of Delgado in the prologue and Lemond and Fignon in good positions. A victory of Super U in the Team time trial and a win and yellow for Lemond in the first individual time trial. Lemond was again in contention. So was Fignon. Lemond had used revolutinary handlebars for professional cycling, triathlete handlebars

In the Pyrenees, Delgado did very good stages in Cauterets and Superbgneres and Lemond was great. However the new leader was Laurent Fignon with 7" to Lemond. It was the first time in five years that Fignon wore the yellow.

The French kept the yellow till the Alps, but he had a very bad day in the time trial of Orcieres Merlette and lost the yellow to a great Lemond, The favourite to win the stage, Delgado, also disappointed and it seemed that the Tour was a matter of two guys, Lemond and Fignon.

Fignon suffered again in the way to Briancon and lost contact twice. On the col of Vars and on the col of Izoard. He finally saved the day with an insignificant lose, 13" ...

Then came the queen stage of the Tour, the finish on the Alpe d´Huez. Delgado´s team controlled the race , with the Dutchman Theunisse in front, bue when Delgado´s attack was expected on the Alpe, Lemond and Fignon started their sow with several attacsk. With four kilometres left Fignon did the last one, and Delgado could join him, Lemond was dropped. Theunisse won the stage in the Dutch climb and Fignon earned the yellow.

A yellow that seemed clear for the French after a solo break in the route of Villard de Lans.

Fignon won the stage, and only the help of Delgado and the PDM team saved Lemond. By the way the 50" lead seemed enough for Fignon.

And there was one more dain in the Alps, Aix le Bains. And it was one of the most famous breakaways ever, with the best riders in front. Lejarreta, Theunisse, Delgado, Fignon and Lemond escapaed early and arrived at Aix le Bains in the same positions they got at Paris. A very good day to finish an exciting Alps.

We only had to wait two more days for the 23rd of July , and the last time trial of Versailles is history, 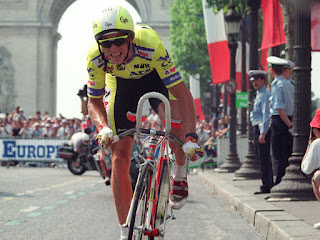 Lemond used the triathlete hadlebars and recovered the yellow by the shortest margin in Tour history, 8 seconds. Fignon cried, Lemond was delighted


However, Fignon had another opportunity to beat Lemond, the Worlds were in Chambery, France.It was a veru tough circuit and the day was hard too. A rainy day in the Alps.......

The French team did a very good race and Fignon attacked several times,

but Worlds had been a difficult race for Fignon and a very suitable one for Lemond ( who had been second twice in 1982 and 1985, and first in 1983), and  Lemond acted very intelligently, marking Fignon. The attack of Fignon in the last lap was neutralized by Lemond in the last kilometre. Lemond would win a small group sprint with Fignon only seventh.

Konyshev and Kelly were second and third respectively.

Fignon closed a great season being the number 1 in the rankings, but Lemond had defeated him twice, in the Tour and the Worlds.

Lemond left ADR and signed with the powerful Z team for the 1990 season. It would be an interesting season , and the new fight between Fignon and Lemond was expected anxiously.

Happiness for Lemond, a great 1989 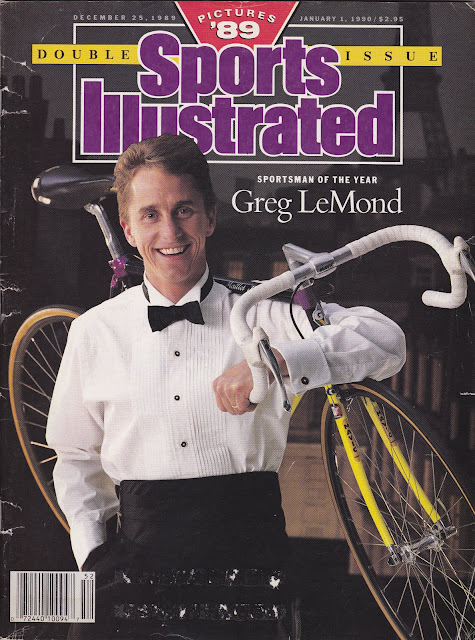