Greg Lemond. One of the greatest. Part VI.


After his great comeback in 1989, Lemond faced a difficult season. He was now a star gain and he had to reafirm that. He was going to wear the rainbow jersey and was going to ride for a new team , the Z team. A very good team in fact, nothing to do with the ADR.

In spite of the expectations, Lemond´s season was disappointed, without victories, and the most important, without good races/positions. Only a 10th place in Switzerland for a two time winner of the Tour and Worlds seemed ridiculous.

He took part in the Giro, but his role was even worse than the previous year finishing nearly three hours ahead of the winner, the Italian new heroe, Gianni Bugno.His 3rd and 4th positions of the years 1985 and 1986 seemed very far now.

However his main challenge was the Tour. It was a race where he´d always had good performances, and it started well with a second place in the prologue, only the specialist Marie could win him.

But an important event took place in the first stage. A breakaway with dangerous riders such as Chiapucci, Bauer and Pensec got to the finish line of Futuroscope with more than ten minutes to the bunch. Chiapucci had done a good giro,  Pensec and Bauer had been top ten riders in the Tour previously. Pensec was one of Lemond´s domestiques.

The favourites had to get over the situation. Alcala won the first long time trial, but Lemond did not have a good day, due to the bad weather and Pensec , Chiapucci and Bauer resisted.
There was another problem for the favourites. It was one of the softest Tours ever, with only one important stage in the Alps and other in the Pyrenees.

Another important new was the retirement of Fignon, who was having a terrible season.

The Alps came and it was Delgado´s land. The Spaniard had to recover time in every single mountain day, and so he did it. He attacked in the summit of Saint Gervais Mont Blanc gaining 20" to the favourites and attacked again on the descent of the Col du Glandon in the way to Alpe d´Huez the following day.

His mate Indurain did a very good job in the valley with Delgado, Bugno , Lemond, Chozas and Claveyrolat on his wheel. Delgado attacked in the first slopes of the Alpe and only Bugno and Lemond resisted  but Delgado did not have his day and dropped with 4 kilometres left, at the same time Breukink made contact and attacked.......

Fianly Lemond , Bugno, Breukink, Parra and Claveyrolat competed for the win , and the winner of the giro won in an exciting sprint. Lemond was again second on the Alpe.


Bauer and Maasen were now out of contention ( Maasen had been the othe component of the breakaway of Futuroscope), but Pensec ( the leader ) and Chiapucci had resited well. Delgado had dissapointed.
The following day there was a mountain time trial that Breukink won , with Delgado second. Lemond struggled again in a time trial and Pensec had a very bad day losing the yellow to Chiapucci.

Breukink was now the first of the favourites 7 minutes ahead of Chiapucci, Lemond nearly 7'30" ahead and Delgado 9 minutes ahead.

A difficult Tour for the favourites, and Chiapucci was a good climber and only two important stages left, Luz Ardiden and the tie trial of Lac de Vassiviere.

However the key stage of the Tour was an unexpecting one. Saint Ettiene´s. It was a very hot day and Lemond attacked hard in Chaubouret. Delgado and Bugno were caught by surprise and Chiapucci and especially Pensec struggled.
Chozas won the stage in a group with Lemond and Breukink, Delgado ( helped again by Indurain) and Bugno lost 30" and Chiapucci more than four minutes.
.
Chiapucci was still the leader but  Breukink and Lemond were 2'02" and 2'34" respectively.

With the wn of Lejarreta in Millau, without important differences, it was time to face the queen stage of the pyrenees, the one with Aspin, Tourmalet and Luz Ardiden.

Surprisingly, the leader Chiapucci attacked in the Col du Aspin in a similar attack of Hinault´s one in the way to Superbagneres in 1986. But he was caught just before the first slopes of Luz Ardiden. Breukin had dropped and Delgado wasn´t having his best day, so Lemond decided to attack

Only Lejarreta and Indurain kept his pace, later only Indurain. The big Spaniard was having a very good Tour and many critics said that he could have won the Tour if he hadn´t worked for Delgado.
Lemond was winning the Tour and he knew it, he was forcing a lot and finally Indurain won the stage with Lemond coming in second 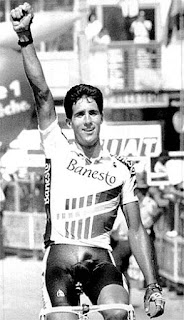 Chiapucci kept the yellow, by an insignificant margin, 5". But there was a time trial left, and Lemond who had suffered in the stage of Pau due to a puncture that Chiapucci´s squad took advantage of it.

Breukink won the time trial achievng the third position overall and Lemond did a good time trial, enough to take get the yellow. He entered Paris as a winner , three time winner of the Tour, but he was one of th few winner without stages ever. 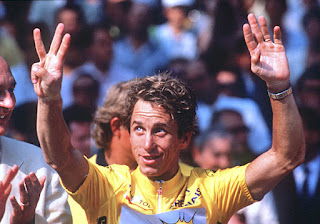 That September he would try to tie Binda and Merckx with three Worlds, but he could only be fourth. The winner was the surprising Dhaenens.

The season ended and his only victory was the Tour. It was clear that he was a different rider than before the hunting accident. In spite of that, his determination enabled him to tie Thijs and Bobet as three time winners of the Tour. 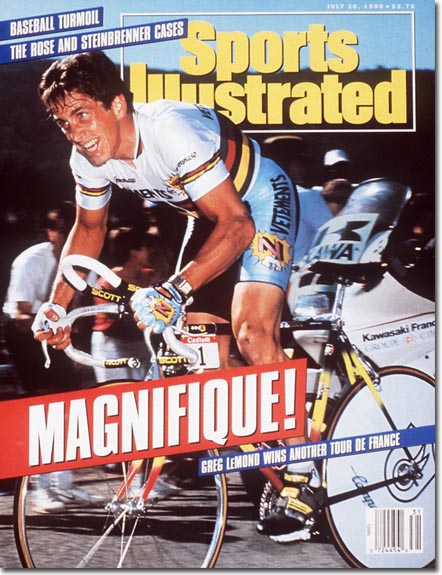 The following season seemed to be exciting because the new generation of Breukink, Bugno , Alcala and Indurain were knocking at the door and the old one was losing power , with Fignon, Delgado and Lemond.

Would be Lemond able to win his fourth Tour in 1991 and get closer to the legends Anquetil, Merckx and Hinault ?
Publicado por pedrofbs en 18:52