The triple crown. Greatness and curse. 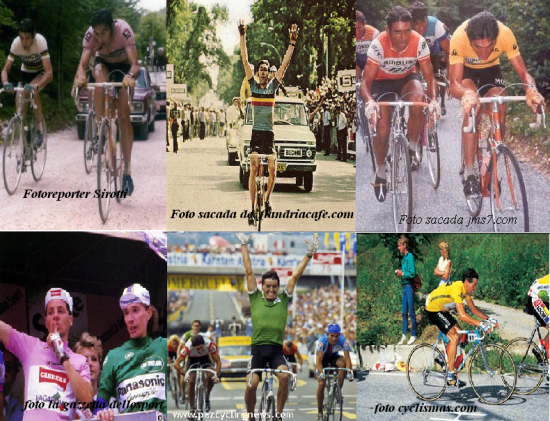 Fausto Coppi in 1949 ( he won Giro - Tour and only 3rd in the World Championship that was very flat that year) and Miguel Indurain in 1993( he won giro-tour but was second to Armstrong in the Worlds of Oslo ). Hinault could have done it in 1980, but he had to quit the Tour when he was in yellow due to knee injury.

In the case of Eddy Merckx, the triple crown was a matter of time, but time was passing and at the end he got it in a year that was predicted to be a " bad year" for the cannibal, knowing that he had a bad classics season.

For the first time in all his career Merckx didn´t win a  major classic, and when he faced the "Giro", he soon was overshadowed by the Spanish climber, Jose Manuel Fuente, who took the pink jersey and some stages.


It was obvious that we were not witnessing the best version of the cannibal, but he was not going to surrender. He won the time trial of Forte dei Marmi and two days later exploded the race in a very bad day in the way to San Remo where Fuente got dropped. From then on, he survived the crazy attacks of the Spaniard and the pressure of the Italian Gimondi and the youngster Baroncheli.

Finally he could keep a narrow adavantage in the Dolomitic stages of Lavaredo and Bassano del Grappa to win the Giro ( his fifth giro , tying Binda and Coppi) by the fewest margin, a mere 12" to Baronchelli ( and 33" to Gimondi ). It was such an interesting Giro that a video called " The greatest show in the Earth" was broadcasted in homage to the Italian event.

The he won the Tour of Switzerland, and went to the Tour as the only favourite ( due to some abscenses like Zoetemelk and the former winner Ocaña). He apparently won it easier but he suffered a lot in the mountains with the Spaniard Aja and the old Poulidor forcing the pace then. Merckx won 8 stages and equalled Anquetil record of five wins, but the way he won was not a powerful way ( in spite of the appeareance).

The Worlds was held in Montreal , and Merckx had to fight againsta ver good French team, with Thevenet trying  long solo attack and finally Poulidor arriving at the finish line with Merckx ... Pou Pou as usual was second ( Merckx outsprinted him easily), as in the Tour. The third placed rider was another Frenchman, Mariano Martínez.

Merckx was a total legend ( he was a legend before that achievement but the triple crown was incredible). Strangely for Merckx, he never won again any of these three races and only was podium in the Tour of 1975 ( 2nd behind Thevenet). Even he didn´t win more stages in major races ( he won one in the 1977 Tour but because the winner was disqualified). It could be a question of age or simply cassuality ... who knows ...

No one seemed able to equal that " impossible", it was difficult even for greats ( such as Fignon, Hinault or Lemond), but not for a very good rider ( not a legend at all), a smily Irishman, who found the shape and the luck of his life all in the same season and in the necessary moments ( an odd season as his good years 81, 83 and 85)  .

The Irishman who had signed for Carrera in 1986 ( from la Redoute after having a very good 1985 year), spent most of the season injured ( though he took part in both Giro and Tour), due to a late crash in 1985.

Carrera owners were very dissapointes and Roche was desperated to find his old form ( looking for different doctors). Finally he suffred an operation but all got right for the 1987 season.

Roche noticed his good shape in the early races, doing very well in Nice, Criterium or Liege. Later he won Romandie ( for a record third time), he was ready for the Giro ( where he was supposed to be a domestique of former winner Visentini) .

Roche would win the Giro after a controversial fight against Visentini and his team, especially in the medium mountain stage to Sappada, when Roche attacked, Visentini cracked and the pink jersey changed from the Italian to the Irish ... only 5 seconds was the distance from the new leader to new second overall, a young promising Swiss rider, Tony Rominger.

The last week Roche had to stand the tifossi, who tried to hit him ( and insulted, spitted,...) especially in the stage to Canazei. 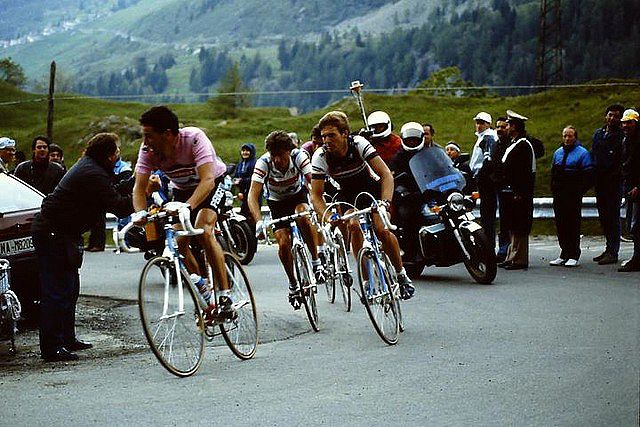 Roche resisted with the help of his superdomestique Scheppers and his friend Robert Millar and won his first major Tour.


Then he rested and not competed till the Tour, and when it started in Berlin , he was pointed as one of the main favourites. The 1987 Tour was probably the toughest ever and fortunately for Roche, the second part of the race the heat dissapeared in almost all the important days ( but Alpe Dhuez).

The Tour was a thriller, with some controversial chapters inside the Carrera team, and with several changes of overall leaders. When the key moment arrived ( in the Alps) only two men remained with options, Delgado and Roche. Delgado took the yellow from Roche in the Alpe Dhuez,

but couldn´t obtein enough time to Roche in the following stage to la Plagne, the day Roche fainted at the finish line.That day Roche won the Tour. 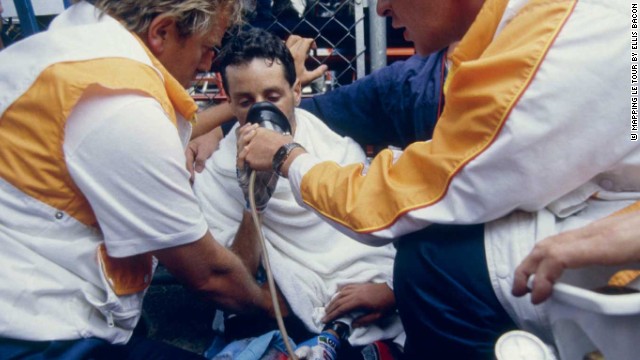 Three days later he retook the yellow in the time trial of Dijon and won the Tour the following day. An incredible double Giro-Tour for a rider like Roche.


He was not thinking in the triple crown, in fact Kelly was the leader of the Irish team for the Villach Worlds.

Fortunately for Roche the weather was cold and rainy the day of the Worlds ( days before it had been hot), and the Irish team waited for his moment during the race in spite of a dangerous breakaway of Argentin. In the last two laps there were still a lot of riders in the bunch , so Roche accelerated and inside the last lap no more than 12 riders had real options of winning the rainbow jersey.

Roche played his domestique role closing breakaways but the surveillance of Kelly and Argentin in the last kilometers allowed him to scape in a 5 men group. Roche was the most intelligent of the group and his later attack had no answer ... he had won the World, he had equalled Merckx, he was now a legend too.

Kelly rised his arms in a sign of victory, the smily Irishman had done the impossible ... Giro, Tour and Worlds.

As happened with Merckx ( a different case without doubt), Roche never won again any of those three races , and never got to the podium or wore the leaders jersey again. his career still had flashes but seemed over at the end that marvellous year.

Perhaps the curse of the triple crown is real. Such a succeed is only possible ( even if you are a great champion as Coppi, Indurain, Hinault,...) if luck and good fate are with you, and if you achieve it you spend all of them, does it seem ridiculous ?, I don´t know but what I know is that nowadays is very unlikely to see again another triple crown winner, and if we see one I will pay attention to the rest of his career.
Publicado por pedrofbs en 11:21