It was 1998, and Marco was sad because his dream to win a grand Tour was difficult to make possible.Injuries, time trials, bad luck, great riders such as Indurain and Ullrich, etc were punishing him.

He was a loved cyclist, he had won several mountain stages ( Alpe D´huez two times, Aprica, Merano, Morzine,...), but his only dream was winning a major Tour, and wearing the leader jersey.

And then, the giro came
A good route for the 81st edition of the " corsa rosa", with several nervous stages in the first half, and the decisive stages in the last week.

In spite of the route, things were happening in a different way that Marco had expected.

Alex Zulle won the prologue and took the first pink jersey. The rider that had won the Vuelta twice the years before was ready to win in Italy. 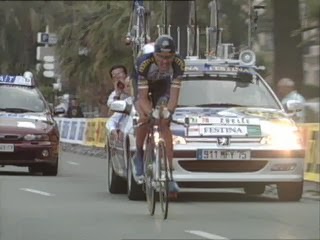 The powerfull Zulle ( and riders like Bettini and Bartoli) was dominating the Giro and the attacks of the Pirate were not enough. 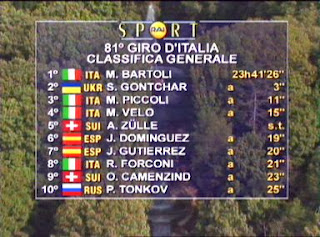 But one day later,in Lago Laceno Zulle destroyed the pink jersey, Bartoli, and the attacks of Marco Pantani to win the stage, and recovered the " maglia rosa" ... 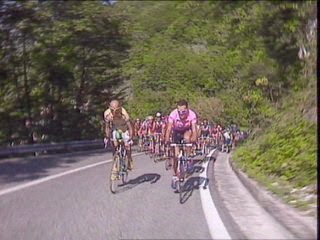 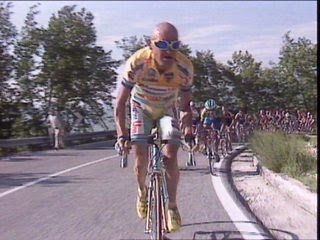 Zulle answered all the attacks, and finally passed a tired Marco, who couldn´t counterattack. 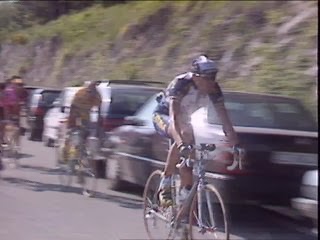 Zulle was showing a terrifying power in very different stages. 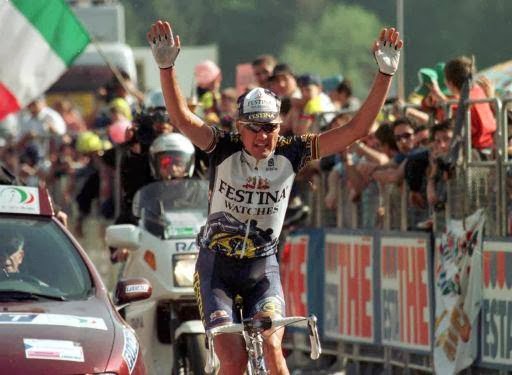 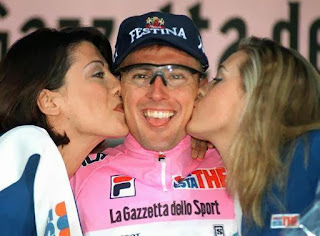 The fight continue in San Marino, with short diferences 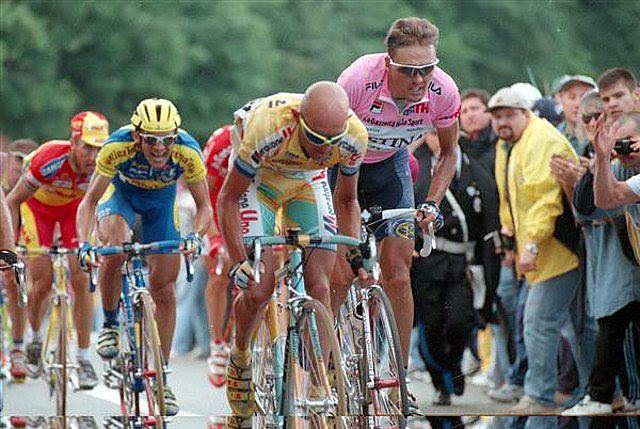 But the superiority of Zulle was not a problem for Marco, who continued attacking, like in the rainy stage of Schio, where Bartoli won the stage, and Noe took the pink jersey, only for one day. 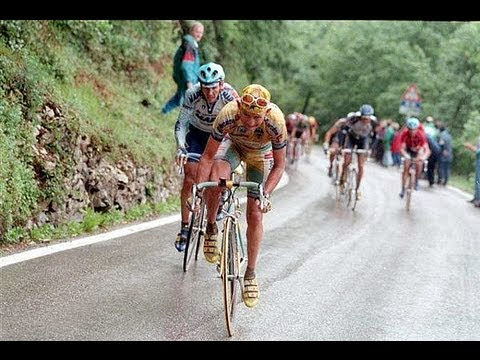 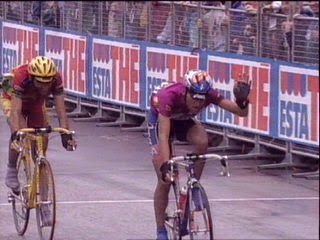 Pantani won in the Piancavallo stage after a good attack, his first win in the Giro in four "bad luck years" ,


It was a good prize for Marco,but the advantage to Tonkov and  Zulle was narrow, only thirteen seconds.

And then came the time trial of Trieste, with Pantani trying his best 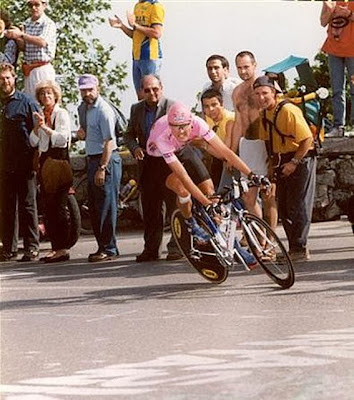 But unfortunately for Marco, he was passed by Zulle , who was in a superb day,

It was a hard moment for Marco 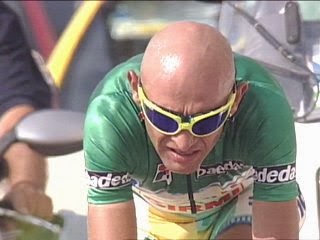 And Zulle who was just flying, won his third stage, with a big margin 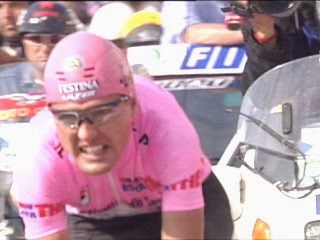 Second was Gontchar close to a minute behind and Pavel Tonkov, third, only 1'22" behind.

But Marco had lost 3'26", and after the time trial, the Italian climber exploded:

" The giro has been done for Zulle. Riders like me have no chances to win it".

But like great champions as Hinault ( who hated Paris Roubaix but fought hard to win it in spite of the bad opinon of the cobblestones), Pantani was not thinking in a surrender, just in fighting.

And it was now time for the mountains. The overall classification was:


A terrifying day in the Dolomites, it was going to be one of the best days of cycling I remember.

The great Passo Fedaia was going to make honour to his legend.


It was a quick stage with several movements, especially from Polti team , and when riders faced the terrible Marmolada, the leader Alex Zulle only had one domestique, Vladimir Belli.

Then in the steepest part of the climb, Tonkov attacked, Pantani chased, followed by Guerini, where was Zulle?... suffering behind.

In a few moments Pantani took the lead ( there were some riders in front of them, Chepe Gonzalez, Buenahora and Camenzind the most important ones), and Tonkov was struggling too, Pantani with the green jersey of best climber was flying

The miracle of wearing the pink jersey was still a dream, but a possible dream. The third and fourth overall were openning a good gap to Tonkov, more to Zulle.

The first man to pass the Passo Fedaia, was Chepe González, then Buenahora , Camenzind ... Pantani and Guerini crossed the line 1'20" behind , and Zulle ( who was with Piepoli)at that point was just thinking in saving the day. Nearly two minutes lost to Pantani. Tonkov and Miceli were losing 50" with Marco. 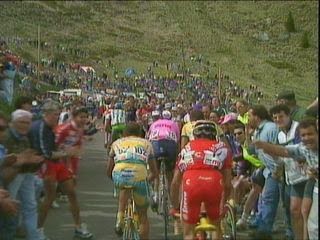 In the following climb, Passo Sella, the leading group was formed by Camenzind, Pantani, Buenahora Guerini and Gonzalez.

Pantani had a chain problem in the climb to Passo Sella, while Guerini accelerated. No problem for Marco who recovered the time quick and scaped with Guerini. Buenahora, Gonzalez and Camenzind dropped.

Zulle was losing more and more time, Pantani was getting closer to the provissional leading.

Pantani was touching the pink jersey with his finger during de ascent to Sella, Guerini was a good ally in the breakaway 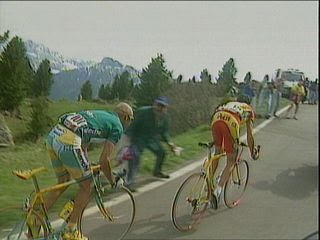 It was going to be a great day for Marco, the best of his life. Guerini and he were riding together. It was good for both of them. The tiffosi were excited, people shouted thename of the Pirate, and they crossed the line of Sella ... Pantani was the provissional leader and Tonkov was losing 2 minutes, a great margin for Marco.

In the last meters he pushed hard 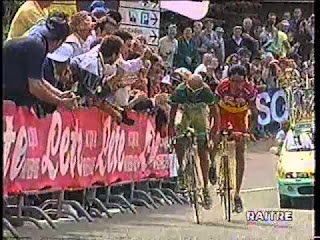 and finally Pantani gave the win to Guerini


Guerini the winner of the stage, Pantani, could be the new leader, the new pink jersey. It had been a great stage and the supporters of the Pirate started to dream with the win in the Giro. Zulle was weaker than it was supposed.

Tonkov rode the last kilometers with his partner Camenzind, but he barely recover some distance to Pantani 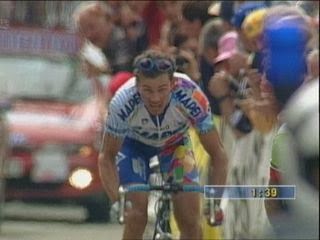 He arrived 4th, with Chepe Gonzalez third more than two minutes behind ( 2'04" ).

It was the moment for the arrival of the leader. But when Zulle arrived to the flag of last kilometer, all of us knew that he had lost the leader´s jersey. 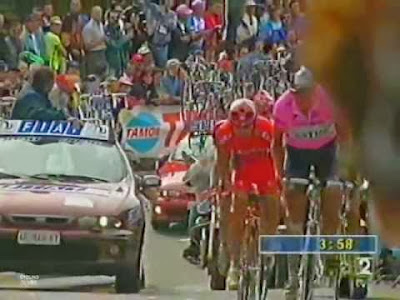 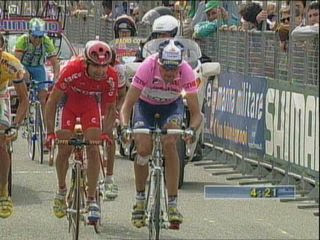 Seconds were passing and the final time was 4'37" . Zulle was not the leader , and with the bonus of the second position of Pantani, he was now third 1'01" behind the Italian. That day would be the last time for Zulle to wear the pink jersey.

Yes, the dream came true, Pantani was the leader of the giro, unbelievable.Happiness all around. 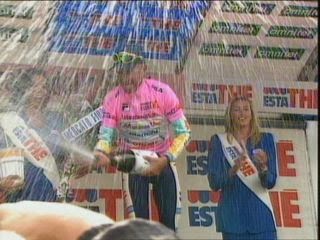 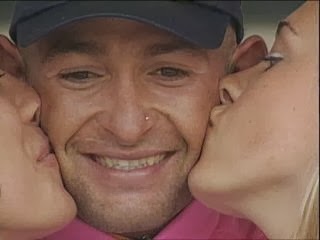 And there were two mountain stages left. If Pantani could arrive to the last time trial with 2-3 minutes to Zulle he could win. And what was sure was that he was going to attack one and again in those two days to Pampeago and Montecampione.

Words of Pantani " I was not having a good day at Marmolada , but I knew I had to attacks. Now I have gained tme, but not enough. I will have to continue in an offensive attitude if I won to win. Zulle is not the only threat, Guerini and Tonkov are dangerous too".

Meanwhile Zulle was admitting a bad day, but hoping to win the giro. For Guerini it was a good win and not a pact with Pantani.

A good summary of the day in numbers...
My favourite cyclist in pink, in a very good giro with Bettini and Bartoli rideng very well, with Noe fighting and wearing the leader´s jersey, with Zulle riding very strongly, with Tonkov and Guerini, with Camenzind ... the fianl stages seemed to be fantastic.

And the following day, a short stage with a very difficult finish climb to Pampeago, a climb with very steep gradients.

All was possible now, Pantani was not the only favourite yet, but he could dream, the tiffosi could dream and the world of cycling could congratulate for such a day of the great Italian climber.

Later he would admit that during the climb to Marmolada, he spoke with his domestique Conti when was going to take part the steepest part of the climb ( he was anxious) and Conti told him they were just riding it, to Pantani´s surprise.

Things of Marco, things of a true champion.

In spite of the glorious day in Val Gardena, the race was not going to be easy, and Marco would need to prove that romantic cycling was still alive.