Arabba 84. An exciting and controversial giro. Part I.


The 1984 season was very exciting one. Hinault had left Renault and signed with La Vie Claire of Bernard Tapie, and Guimard could play two cards, the World championship, the young American Greg Lemond, winner of the Super Prestige Pernod of the 1983 season too

and the winner of the 1983 Tour, Laurent Fignon

The king Hinault against his successors.Was Hinault recovered from his knee injury?

The thing was that he had returned, or at least that was what it seemed because of his reaction with workers who closed the road of one of the Paris Niza 1984 stages 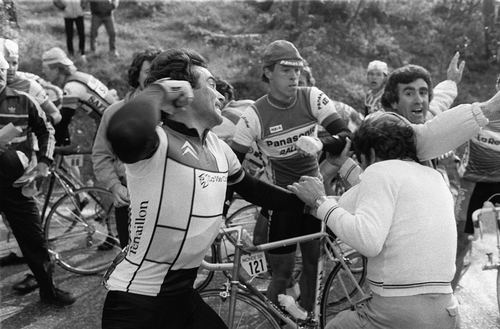 Lemond would ride the Tour anf Fignon would try the double Giro-Tour.

And before entering the 1984 Giro, we should speak about a great cyclist, another champion..........you can guess him, we are speaking about Sean Kelly

After winning his third Paris Nice in a row, he performed in a Merckxian´s way.

But before that, we want to stop a moment to write some positions of the 1984 Paris Nice

And from here to the Vuelta, ther results of  Kelly were simply extraordinary

1st in Liege and Roubaix, and second in Flandes ( behind Lammerts) and San Remo ( behind Moser). He would win in the last part of the season the Paris Tours too.

In San Remo an intelligent Moser won the race, he was preparing the assault for the giro ( that as usual had a very good route for him and Saronni with few mountain stages ) and the victory was a good motivation........

And in a Vuelta that was supposed to be a duel between Sapnish climbers such as Fernández, Lejarreta, Delgado or the promising Gorospe, a French rider won it, Eric Caritoux:

The victory was the closest ever in a Grand Tour, only six seconds to Alberto Fernández. Moser who was preparing the Giro finished in a good tenth place.

For the edition of the 1984 Giro d´Italie Vincenzo Torriani had prepared an easy route:


Some hilly stages, a lot of time trial kilometres, and only two mountain stages, the one including the Stelvio pass in the route of Merano ( the ascent would be cancelled and substituted by Tonale and Palade, Fignon nearly quit ) and the arabba stage in the Dolomites.


The Giro started with a victory of Moser in the prologue, and a Renault victory in the team time trial, as expected, so Fignon was wearing the pink jersey for the second time in his life ( he had been in the 1982 giro as a domestique of Hinault)

The lead of Fignon was 4" to Moser.

But he increased the advantage to 352 in the stage of San Luca. The planning of Fignon was perfect at the monet.
And the fifth stage was a hard one , with the finish in the BlockHaus


A good stage for the Spanish climbers such as Lejarreta and Alberto Fernández to gain time over the time trialists, like Visentini , Saronni or Moser, and a good day for Fignon too.

That day Argentin won the stage with Moser on his wheel and Fignon lost 42" and 15" more with the bonus to Moser ( who had attacked once he noticed the difficulties of the leader).

Now Moser was the new leader, with Argentin, Visentini,Fignon ( 43" ahead) and Lejarreta fifth.

Things didn´t change ( with the exception of Visentini´s victory in Lerici in a difficult day for Moser ) till the day of the first individual time trial from Certosia pi Pavia to Milan, 38 kilometres.
It was supposed to be a good duel between the two first overall, Visentini and Moser, but in spite of the good time trial of Visentini ( 2nd less than  minute ahead of Moser), Moser won easily , even with a puncture at the end.


Fignon lost 1'28" and was still 4th in the overall, but the mountain stages were still to come.

In the stage to Merano the Stelvio was cancelled ( in strange circumstances, because there were photographs that showed the climb open) and the Tonale and Plade were not enough for Fignon , who dropped Moser in the Tonale, but was caught on the descent.

Guimard and Fignon complained at the end of the stage, they have hoped of a revival of the Sondrio 1982 stage using the Stelvio and Torriani had spoiled their dreams...........

The result was that the stage finished without differences in the first positions of the overall.


But there were two more mountain stages, the first one was ridiculous, but there was no time to cry, Fignon had to gain time on Moser.

It was a long climb, in a very short stage

The main character of the stage was the Spaniard climber Marino Lejarreta who won the stage with more than a minute to Fignon and nearly two to the pink jersey Moser.

Fignon closed the gap but had no luck at all because he had a chain problem , otherwise he would have recovered more time.

But it was worse for Visentini who was insulted by spectators ( because of his words to Moser ) and nearly quitting , finally losing 13 minutes


Only one more day in the mountains, from Selva di Val Gardena to Arabba, 169 kilometres.

The last opportunity for climbers. Lejarreta, Fignon, Baronchelli, and even Van der Velde had a good chance to drop Moser. And, What about Argentin?, he was perfoming very well, who knew...........

All was ready to face the Dolomite stage of Arabba. Would Moser keep the pink jersey?
Publicado por pedrofbs en 17:42