Riders would pass Campolongo twice, Pordoi ( the new "Cima Coppi" once the Stelvio had been cancelled), Sella and Gardena


It was time to fight for Fignon..........
The stage started with calm, and nothing important happened till Campolongo, where Zappi crossed the summit in first position, with the field close to him, but the nervousness/tension was in the air.


And finally Fignon attaacked, dropping Moser easily, only Beccia, Lejarreta and Van der Velde, kept his wheel. Unfortunately for Fignon Lejarreta was not o his best day, and both Beccia and him lost ground quickly. The Spaniard was tired due to the previous day to Selva di val Gardena.

However , the French and the Dutch lead the race with an increasing advantage. Fignon was first in the summit of the Cima Coppi entering the in the story of the Giro, Van der Velde with him.

A reduced group with Moser 58" ahead, Argentin and Lejarreta were there too. Moser was losing the pink, and threre were more than 40 kilometers left.

Moser forced on the descent and reduced the gap, but when riders faced the Sella tha gap increased. Fignon was focused on winning the giro, and Van der Velde was on his wheel......


Fignon was showing that his victory in the 1983 Tour was not casual, he was a champion, and he would be a favourite to win the 1984 Tour.


He was riding in a very aggressive way as Hinault had done in 1980 and 1982 to beat the Italians. In case he won the Giro he would join Anquetil and Hinault as only French riders to win in Italy. All was great for Guimard´s team.
Fignon was first again in Paso Sella, the advantage of the coule to the leader was 1'35".

All was going perfecto for Fignon , if he continued like that he avantage could be more than three minutes at the finish line, but Moser was being helped and spectators were pushing him ( or at least Renault team complained about that), and when Fignon and Van der Velde reached the summit of Gardena the difference was less than 1'45". A good gap, but not enough, thinking in the last time trial.

So when Fignon faced the first slopes of Camplongo he accelerated and left Van der Velde, he knew more seconds and was trying his best

He was deseving the win and when he crossed the summit of Campolongo his advantage to the Dutchman was 20" and nearly 2'30" to Moser.


Only one important stage to the end , the time trial that finished in the "Arena of Verona".

So Fignon enjoyed the way to treviso, concentrated on defending the pink. Moser new all was still possible.


But when Moser started the last time trial, the luck was sorted,

When Fignon arrived at the Arena, he was second , but he had lost 2'24", and what was more important the Giro overall.


After the individual time trial of Verona, Fignon was really angry and dissapointed. He accused the helicopter to disturb his rythm and give advantage to Moser.


Moser had his Giro, finally he had achieved it, years fighting to Saronni and Hinault and finally he had defeated the new raising star to become a legend for tiffossi...........

Fignon had his revenge in the Tour, where he humiliated Hinault and won in a Merckxian way.
One of the best Tour ever, as you can see in the overall , with Fignon, Hinault, Lemond, Millar and Kelly in the top 5. 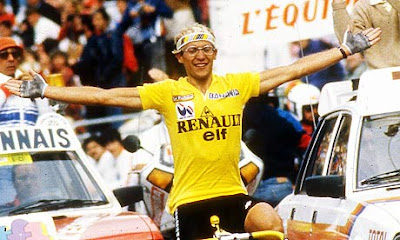 Later in the season Criqeulion won the Worldchampion that took place in Montjuic, with Corti and Bauer 2nd and third.

In a very tactic race the favourites Lemond and Argentin focused on themselves losing the opportunity in a good route for them.
Late in the season, we had the definitive comeback of a champion. After the dissapointing Tour Hinault won the " Giro de Lombardía"

The dictator of the 1984 classics, Sean Kelly was only 17Th, but he won clearly the Super Prestige Pernod .

Hinault was ready now to give La Vie Claire and Bernard Tapie more ( and important ) victories. In 1985 he would be helped by the young American star Greg Lemond who had been signed by Tapie as the " million dollar man".

But that would be a different story, 1984 was Fignon´s and Kelly´s year.

Arabba 84. An exciting and controversial giro. Part I.