Greg Lemond one of the greatest. Part III.

In 1984 Lemond made his debut in the Tour. However, it was a strange Tour, because it was the Hinault´s comeback after missing the previous edition ( due to a knee injury). The badger was now in La Vie Claire , Bernard Tapie had signed him. Lemond was a well reputated rider, but the press was speaking only about the Fignon-Hinault duel. Lemond was in a second row. 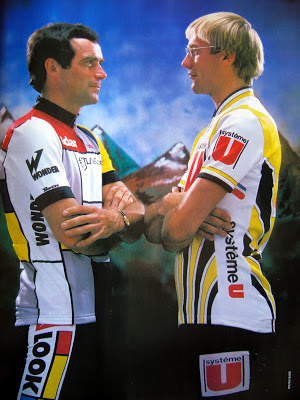 Finally the Tour was a parade of Fignon and Renault, with Lemond third . Lemond did a good Tour, but worse than expected. Besides that Fignon had humiliated Hinault, winning five stages. Lemond had suffered of bronchitis in the Pyrenees and was not a rival at all.

Lemond then had to think in his future. Bernard Tapie was looking for a successor of Hinault. He liked Roche but liked Lemond too. Who would be Tapie´s choice?.

It was Lemond, not Roche.

Lemond decided to change team to be a leader ( Hinault was close to a retirement, Fignon was just starting). The American signed a very good contract and he was called by the press " The million dollar man".

It was a good operation for Tapie. He signed a very talented rider and left Guimard without one of his stars.Lemond would be a great domestique for Hinault to make the attempt of the Giro-Tour in 1985, and even he could assume responsability as a leader in case Hinault wasn´t in good shape.

The 1985 season was the confirmation that Lemond was a very good rider but, used to find difficult winning races. On the other hand, Fignon injured and his season was over. The big Tours were now easier for the la Vie Claire couple.

In the giro Hinault won his third rosa and Lemond finished third. Both of them were ready for a Tour where their team was favourite to win.


The first part of the Tour was controlled by Hinault and his team, as expected. Hinault was in yellow after a good win in the long time trial of Strasbourg and a break with Herrera in the way to Avoriaz.


Unfortunately for the French, a crash in the last kilometre of the stage of Saint Etienne left him with a nose fracture for the rest of the race.Lemond was now closer due to a break.


Rumours about Hinault quiting the Tour were in all places. Would Hinault repeat his abandon of 1980?.........not really.

Hinault had a bronchitis in the Pyrenees and suffered in the way to Luz Ardiden in the Queen stage ( Aspin-Tourmalet-Luz Ardiden), while his rival Roche and his mate Lemond flew to the summit. Hinault had been dropped in the Tourmalet and faced the first slopes of Luz Ardiden with his mate Ruttiman. Lemond was following wrong instructions. He was lied about the difference with Hinault, so he couldn´t ride with Roche. Lemond was nervous, he was only 3'30" ahead of Hinault in the overall. The Tour could be his.

Finally he obeyed the team orders and didn´t ride. The stage was for the Spanish climber Delgado, just some seconds in front of Herrera. Lemond fifth.

1'13" after the American Hinault got to the finish line. Then the American understood that he had been cheated. If he had ridden he would have been the new leader, the new yellow jersey.
Lemond exploded ......"they have made me lose the Tour". He wanted to quit the race.

Bernard Tapie had to speak with Lemond and convinced him to stay in the race. Hinault promised that he would help him to win the 1986 edition. The promise made effect and Lemond continued in the race.
In spite of the victory of Roche in the Aubisque, La Vie Claire kept the two first positions and Lemond won the time trial of Lac de Vassiviere.  Hinault tied Anquetil and Merckx with five Tours, and happiness was again in la Vie Claire. 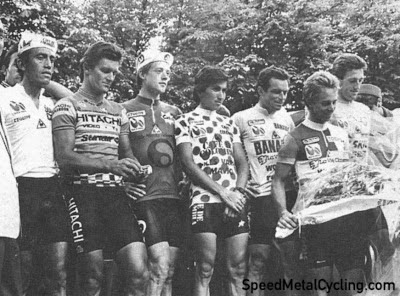 Days later, Lemond won the Coors Classic for the second time in his life

However, Lemond and Argentin, the two favourites were surprised in the last kilometres by the old champion Joop Zoetemelk and Lemond finished second............again.......

A season that could have been marvellous was a "nearly" season with several podiums and few victories.

We would see the year 1986. He would be the leader of La Vie Claire and with the best possible domestique, Bernard Hinault.