When 1970 started, Merckx was the only boss of cycling. Being only a 24 year old guy , he had won nearly all the possible things, and he had humiliated the field during the previous Tour......... 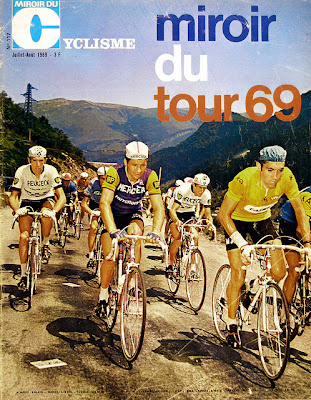 However a terrible event nearly costed his life, he crashed in a track race and his derny pacer died in the Blois velodrome at the end of 1969. According to Merckx words he wasn´t the same rider ever, and he would suffer terrible during climbs in the rest of his carer.

In 1970 Merckx didn´t win the Classicissima, the victory went to an italian rider, 17 years later, after 1953 victory of Loretto Petrucci.

The winner, Michelle Dancelli, couldn´t believe his eyes, he had won it  with a great solo breakaway

That would be the most important win in all his career.
Merckx, now with the Faemino brand, was only eighth in Via Roma.

However Merckx had a terrifying year, winning several races, including his second Roubaix, his second Giro, and his second Tour, in a historical double Giro-Tour, emulating Coppi 1949 and 1952, and Anquetil 1964.

He was the cannibal and he didn´t wait so much to come back to San Remo in a tyrannic way. 1971 would see his fourt victory, in a new squad, the powerful Molteni.

It was a very emotive Milano San Remo , the one that took part that 19th of  March. 4 days before the word champion , the Belgian Jean Pierre Moser had been run over and died, with only 22 years old 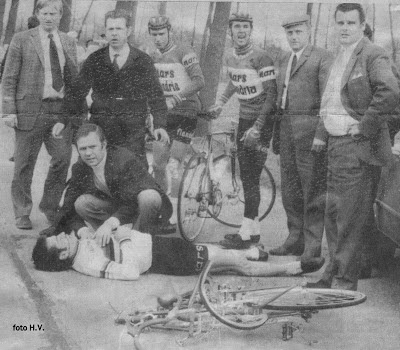 Merckx dedicated the win to Monsere after a late attack, winning in Via Roma 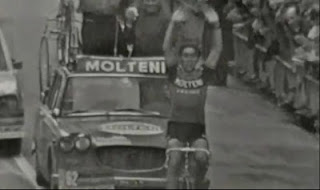 .......with a lead of 30" to his chasers, he had tied Bartali, only Girardengo had more San Remo classics than Merckx, only two more

Gimondi was second in a very offensive rca for him, he had been attacking during the las part of the race but was not able to follow Merckx in his definitive attack. Gimondi was totally conscious now ( opposite to 1968 and part of 1969)that Merckx was going to spoil his options in several races ( the races where the cannibal was taking part)


That year 1971 Merckx would win again the Tour de France and the Worlds, but something seemed to be different, a brave Spaniard , Luis Ocaña had put him into trouble in the Tour, a  Belgian, Roger de Vlaeminck was showing a very good shape in classics and a courageous Spanish climber , J.M. Fuente was liking the Giro.............

Late in the 1971 season Merckx won his first Lombardía

It was another win for Merckx, but that victory made Merckx the second cyclist to win the five monuments, he had got his enemy Rick Van Looy.

In 1972 Merckx was going to take part in the Milano San Remo with the rainbow jersey, a good way to pass Bartali and win his fifth trophy in Via Roma.

It was a very exciting race, with the important rider trying to beat Merckx. The press was speaking about a less dominant Merckx ( especially because of the Tour 71 and his duel with Ocaña).

There were several attacks, with former Winner Dancelli, Motta, Gimondi and several riders forcing the tempo to avoid the superiority of Merckx.
But once the bunch got to the slopes of the Poggio, the cannibal attacked and nobody but Gosta Pettersson could resist.
But that was in the climb, Merckx rsked in the descent and goto to Via Roma alone with some 200 metres of advantage. Enough for Merckx , who was winning with the rainbow jersey. Only Binda had done the same in 1931.

Merckx dominance in 1972 was incredible. Giro ( a great duel with the Spaniard Fuente), Tour ( an absolute superiority to his rivals......ocaña, Guimard, poulidor,etc), and a great achievement in Mexico.

The 25th of October, Merckx got the Hour Record, leaving Ritter behind by a margin of more than 700 metres. The new record was 49,431 km.


A perfect end for a great year for the Belgian.